Our favourite characters from the ubiquitous LINE game Tsum Tsum (pronounced as “some some”) came to life with their first-ever roving parade in Southeast Asia on 2 March 2017. Passerbys in the vicinity of Bugis Junction, Raffles City and Plaza Singapura got lucky as they caught a glimpse of the bigger-than-life Tsum Tsum characters make their way to the Plaza Singapura.

Even at Bugis Junction – the starting point of the parade – hordes of people have gathered to follow their all-time favourite Tsum Tsum, which means “stack stack” in Japanese, characters in this exciting parade. The month-long carnival at Plaza Singapura is by far the largest interactive carnival in Southeast Asia. It kicked off with a spectacular display of the clockwork, which was inspired by a Disney Tsum Tsum short. Avid fans should not miss this captivating set-up at Plaza Singapura.

You can now witness the clock tower striking Tsum o’clock on the hour at Plaza Singapura, test your agility clearing a ninja-inspired mini obstacle course at Junction 8 and Sembawang Shopping Centre. For those living in the East, an adrenaline-rushing experience whilst racing Tsum Tsums atop robotic cars at Tampines Mall isn’t far from home too.

Take a selfie with the giant Tsum Tsum inflatables at Bugis Junction and Raffles City Singapore or find the treasure in the ninja castle at Junction 8 – these simple and fun missions get you a chance to win prizes. This is all part of an immersive offline-and-online (O&O) Tsum Tsum experience shoppers can enjoy by launching an event-exclusive Mission Bingo in the CapitaStar app.

From 3 March to 2 April 2017, the first 10 CapitaStar members to complete their Mission Bingo will be rewarded with 250, 000 STAR$ and other attractive prizes. Other missions to complete include finding hidden Tsum Tsums at Westgate, IMM Outlet Mall and JCube based on clues given out by Sparkle, CapitaStar’s chatbot.

Tsum Tsum is not just about fun and games; it is also about environmental causes, such as promoting the use of alternative energy in conjunction with Earth Hour celebrations this month. Shoppers are invited to light up the Tsum Tsum displays at the Star Vista every evening from 20 to 26 March by pedalling the stationary bikes docked in the mall.

The mileage clocked by shoppers at The Star Vista will be combined with that contributed by shoppers in other CapitaLand malls across Singapore, China, Malaysia, Japan and India, which are holding different cycling-related events.

Target? To unite the efforts of shoppers across these 5 countries and collectively clock a total distance of 40, 075 km, equivalent to the Earth’s equatorial circumference.

The exclusive Disney Tsum Tsum huggables – a must-have for Tsum Tsum collectors – can be redeemed by CapitaStar members with a daily minimum spend of $180* at participating malls. American Express CapitaCard members need only charge a minimum spend of$ $160 to their card to redeem one. 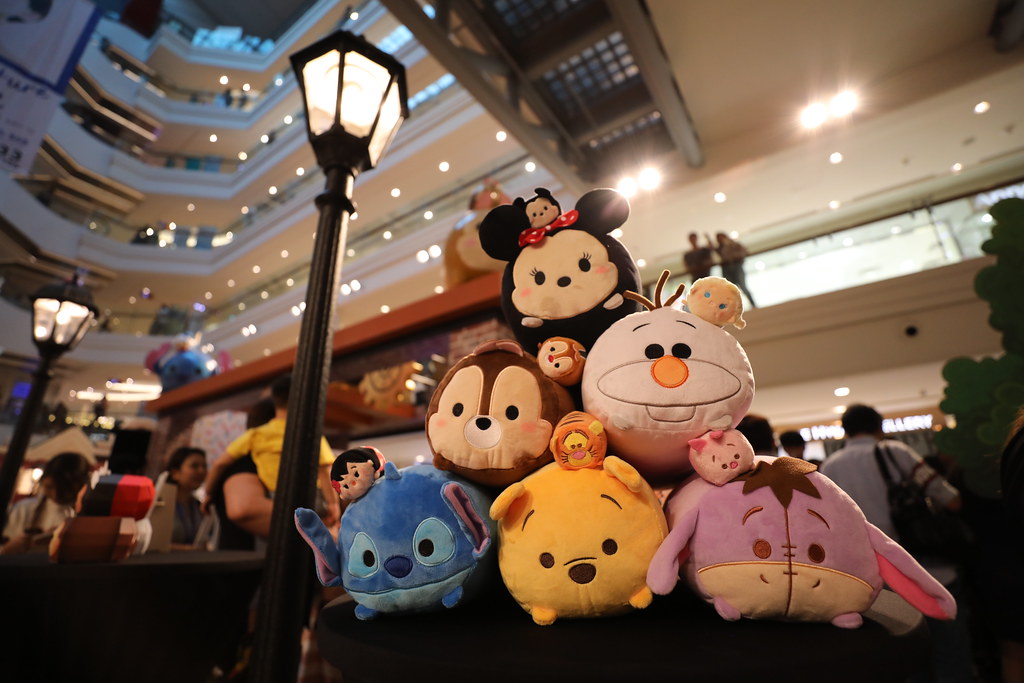 The premium Disney Tsum Tsum huggables featuring popular Disney characters Olaf and Elsa, Chip and Dale, and Stitch and Lilo are available from 3 March. As for sets of Eeyore and Piglet, Mickey and Minnie, and Winnie and Tigger, they will launch on 17 March.

Shoppers who collect all six pairs of plush toys stand a chance to win return air tickets for four persons to Japan – the birthplace of Tsum Tsum – and a five-night stay at Citadines Central Shinjuku Tokyo. Also, watch out for fashionable Tsum Tsum gold jewelry and other official merchandise at participating retailers across CapitaLand malls. A wide array of Disney Tsum Tsum merchandise is also available at the pop-up store by Vendermac.

More details on the list of Tsum-sational adventure activities taking place at CapitaLand mall and the campaign terms and conditions can be found here.

*Limited to two redemptions per CapitaStar member per mall per day. CapitaStar members need only spend a minimum of $120 ($100 for American Express CapitaCard holders) at JCube, Sembawang Shopping Centre and The Star Vista to redeem one. Liar liar pants on fire. American fraudster Mikhy K. Farrera-Brochez, 32, got caught for one thing and his…
byCarrie Er
Hello. Add your message here.
See how Snapask has been helping out over 3 million students around the world. Find a perfect plan