In light of the recent Open Market Value (OMV) hike for larger motorbikes, a gorgeous biker chick took to her Facebook to voice her disdain – and it isn’t in the least bit pretty.

Beneath that cool and nonchalant facade of hers, lies seething anger stemming from the recent increase in OMV for bigger motorbikes. In Vaune Phan’s exact own words, she censured the government for the audacity in “executing daylight robbery on citizens who save up hard-earned wages to own a bigger capacity motorcycle to suffice their daily transport/sport/leisure all in one”. Pretty intense huh, we’d say.

In case words of it haven’t travelled to you, the government announced its plans to raise the Additional Registered Fee (ARF) recently in the Singapore Budget 2017. This drew much flak from the public – and of course rattled the nerves of many in the biking community. Just take a look at some of the critical comments in response to her feisty and ferocious take on the government’s recent move.

So who’s this hot babe dressed to kill in her sultry cheongsam alongside her signature chrome red Ducati? Vaune Phan is a biking aficionado who’s made waves locally and internationally by riding 8, 000km from Singapore to the base camp of Mount Everest, all in the name of charity.

Despite her petite frame, she packs a punch with a massive following of over 20k in her Facebook account. Like her, several other individuals have been blatantly honest about being slapped with a ARF increase up to 100% of OMV. Some of the reactions are just too priceless we’ve got to share:

Indeed a game-changer to the biking circuit, it’s no surprise local biker Vaune Phan has been unabashed and forthcoming in her opinions. Biking enthusiasts would probably find themselves sharing this influential thought leader’s sentiments on the entire furore – since they’re the ones bearing the brunt of it.

As we take a leaf out of Phan’s book, let’s still remember to ride hard, ride sexy – and most importantly, ride safely. We’re pretty sure the hike won’t get in the way of the most fearless and die-hard bikers.

Justin Wee is a first year student from the Singapore Institute of Management (SIM), seen making vulgar and…
byalvinology 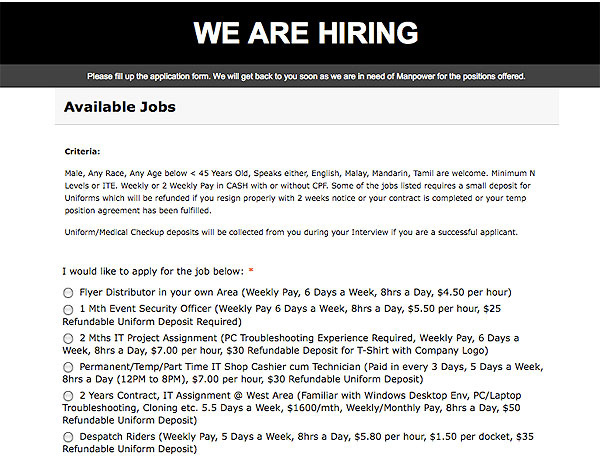 Scamming the unemployed – how heartless can one get?

Via EDMW. There are threads HERE, HERE and HERE, among many others. There are such scam job threads…
byalvinology

Brush your teeth with an overload of cuteness with the new limited-edition Darlie All Shiny White Sanrio Toothpaste – available on 1 September!

Darlie will be launching two limited edition toothpaste featuring Hello Kitty and My Melody. It is the first…
byIrone Kim

In what looked like a scene from a disaster movie, a cleaning team wearing personal protective equipment arrived…
byDanielle Ann
Hello. Add your message here.
See how Snapask has been helping out over 3 million students around the world. Find a perfect plan