In Sydney with Michael Fassbender for Assassin’s Creed Movie

Yeah! I get to fly to Sydney!

That was my first reaction when I was assigned to attend a movie junket, my first. This would have been a piece of cake for Alvin, the one who has got many junket experience and meeting famous people. But me, the one who is almost always behind the camera now needs to sit in front of one and interview celebrities, that got me very nervous.

So there I was, tasked to meet Michael Fassbender, Marion Cotillard and Justin Kurzel to interview them on their involvement in Assassin’s Creed movie.

Fast forward to the day of the preview, totally unprepared for the windy weather in Sydney, I was in comfy t-shirt and jeans. Watch movie so must be comfortable right? Then when I saw the rest of the media all dressed up with make-up and all, I thought I was super underdressed. Oh well… we’re not attending a red carpet what!

With only a couple of sleep in the past 36 hours and the long flight from Singapore to Sydney, I was zombified as I countdown to catch Assassin’s Creed, way before the rest of the world. Deep inside I was very afraid I would fall asleep loh!

I.Must.Stay.Awake! I kept telling myself.

Lucky me, Assassin’s Creed movie kept me awake and I was enjoying all the actions and travelling from present to the past and back. Three times! Or was it four?

The action pack movie was filled with cool parkour moves, jumping from one building to another, the crazy “Leap of faith” stunt and the fight scenes! Assassin’s Creed was more than just stunts and fight, the story was very intriguing too. Love it whenever Fassbender enters the Animus and rocks the scene! I foresee many fans of the game and show will be going around in hooded jackets.

The movie ended my first day in Sydney and the start of the butterflies fluttering inside me. Early the following morning I was to meet Michael Fassbender and do the 5-minute interview! The breaking point came 5 mins before my scheduled timing and I could feel my inside turn 360-degree a few rounds.

Steady Claudia. You can do this!

I entered the room, and the rest were history.

First round with Michael Fassbender, I was sooooo super nervous my voice, hands, legs the entire body lah was trembling. At almost 40, Fassbender is sure one hot bod who’s not just candy to the eyes, but he is also involved in the production of Assassin’s Creed. He shared his challenges in his triple roles for this movie and how he prepared for the shoot.

Next was with Marion Cotillard, she is so beautiful! But she was under the weather and quite heavily pregnant. She shared about her working together with both Michael Fassbender and Justin Kurzel again after Macbeth.

After lunch, I was less nervous but I felt the food-coma hitting me before I entered for my session with Director Justin Kurzel. He was very friendly and outspoken. I could feel his sentiments when he said he wanted to just sleep for a year. Shooting movie like this is lots of work!

All three interviews went well I guess (you watch them and tell me if its ok) since it was my first. Still lots of room for improvement and I think I should just stick to behind-the-scene production lah.

If you have not caught any trailer for Assassin’s Creed, here’s one of my favourite.

We work in the dark to serve the light.

Go catch the show when it opens in Singapore on 22 December 2016. Wear a hoodie when you catch it.

Through a revolutionary technology that unlocks his genetic memories, Callum Lynch (Michael Fassbender) experiences the adventures of his ancestor, Aguilar, in 15th Century Spain. Callum discovers he is descended from a mysterious secret society, the Assassins, and amasses incredible knowledge and skills to take on the oppressive and powerful Templar organization in the present day.

Have you caught Assassin’s Creed? We’ve got some awesome collectibles and movie premiums for Alvinology readers and followers! Tell us which was your favourite part of the movie and why. Best written posts will get to bring home one of the following prizes: This giveaway is open to those living in Singapore only and has not won any prizes from Alvinology in the past 3 months. Winners will be contacted via Facebook messenger or email in January 2017.

Over the weekend, LEGOLAND Malaysia Resort celebrated the launch of LEGO Star Wars Days with a bunch of…
byalvinology 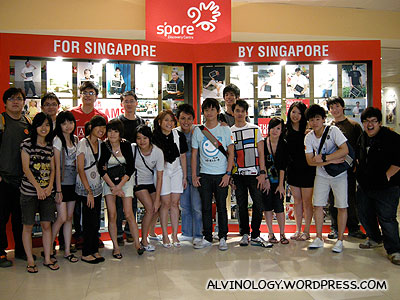 Previous weekend, I visited the Singapore Discovery Centre (SDC) together with a group of bloggers via a bloggers’…
byalvinology