From visionary director Tim Burton, and based upon the best-selling novel of the same name, Miss Peregrine’s Home for Peculiar Children is now showing in cinemas across Singapore.

I was in London the previous week to meet the main cast, including Miss Peregrine herself, Eva Green, as well as four of the main leads from the youthful line-up. Check out the event pictures. The full Q&A with the five artists are available here.

More importantly, I was given an exclusive one-on-one interview with three of the Peculiar Children, Asa Butterfield who plays the lead, Jacob “Jake” Portman, a 16-year old American teenager; Ella Purnell who plays Emma Bloom, an aerokinetic teenager who can control weather and create liquid bubbles; and Finlay MacMillan who plays Enoch O’Connor, a teenager who can resurrect those dead for a limited time.

To best make use of the interview slot, I decided to show the Peculiar Children some peculiar items from Singapore and Asia, given that I was the only representative from an Asian country at the event.

Here’s the list of items if you know what they are:

Watch the three teen artists struggle to figure out what each of these items are:

Can’t get enough of the Peculiars?

Well there is a mighty fun Peculiar meme generator available online and also a special episode of People Are Awesome featuring peculiar people:

As for the movie review, I found it entertaining. Miss Peregrine is an excellent action-adventure fantasy movie which delivers all the fun and excitement. The youthful and fresh cast reminds me of the young slate of Harry Potter cast and I am looking forward to seeing more of them (if there is a sequel coming).

The story largely center around how an ordinary teen boy, Jake, stumbled into a world of fantasy upon unraveling mysteries surrounding his grandfather’s sudden death.

When Jake discovered clues to a mystery that spanned alternate realities and times, he uncovered a secret refuge known as Miss Peregrine’s Home for Peculiar Children. As he learned about the residents and their unusual abilities, Jake realised that safety was an illusion, and danger lurked in the form of powerful, hidden enemies. Jake must figure out who is real, who can be trusted, and who he really is.

Go catch it at a cinema near you! 🙂 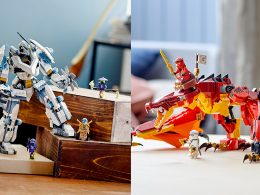 LEGO announces new NINJAGO Sets and a new season of NINJAGO TV to air this June 2021 on Cartoon Network, YouTube, and Netflix This June holidays, your favourite kawaii Sanrio characters will be coming to Changi Airport’s Terminal 3. Expect nothing…
byCarrie Er

If you missed the crazy Double 11 sale in November, fret not, here’s a second chance. There is…
byalvinology