Dear Santa… Are you real? What do you say when a four-year-old child asks: “Are you a guy pretending to be Santa?”

In which case, if you are an entertainer dressed up as St Nicholas from the North Pole, you insist that you are the real McCoy, and offer a chance for the boy to pull at your (hopefully) real beard.

And that is what the Santa in the UK production of Rod Campbell’s Dear Santa did, admirably, when a select group of bloggers were invited by Diva Productions and Snap! Entertainment for a meet-and-greet with Santa over afternoon tea. 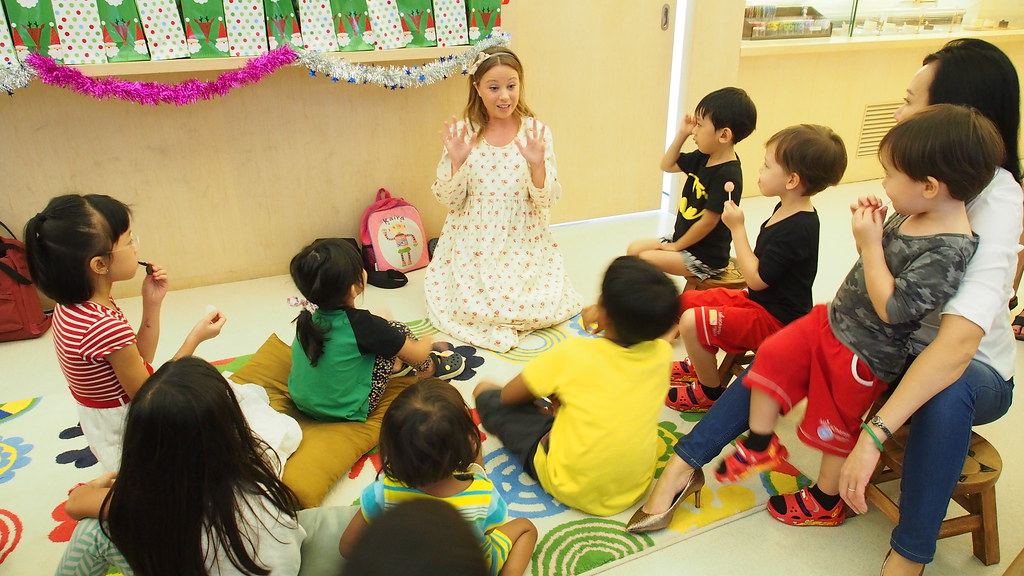 First, the audience got to meet Sarah, a girl in pyjamas.

Our young and tiny audience was properly regaled with a nifty song and dance segment by three entertainers at Kki, a quaint atelier cake shop located in the campus of the School Of The Arts. A girl in pyjamas called Sarah, a Christmas elf and Santa himself turned up the music and delivered a pitch-perfect performance for an enthralled crowd. 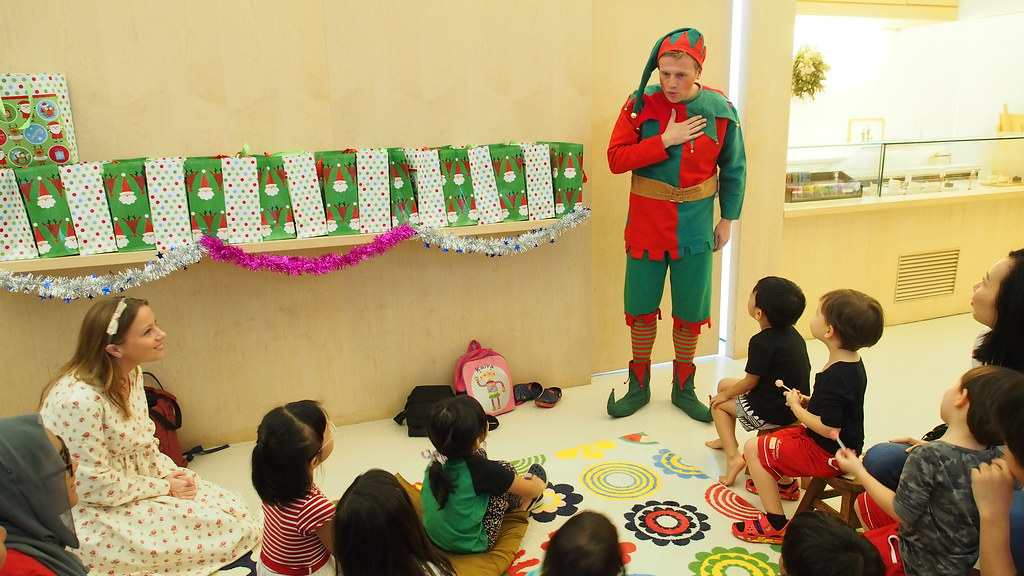 One of Santa’s elves, asking the children whether they have written their letters to Santa. 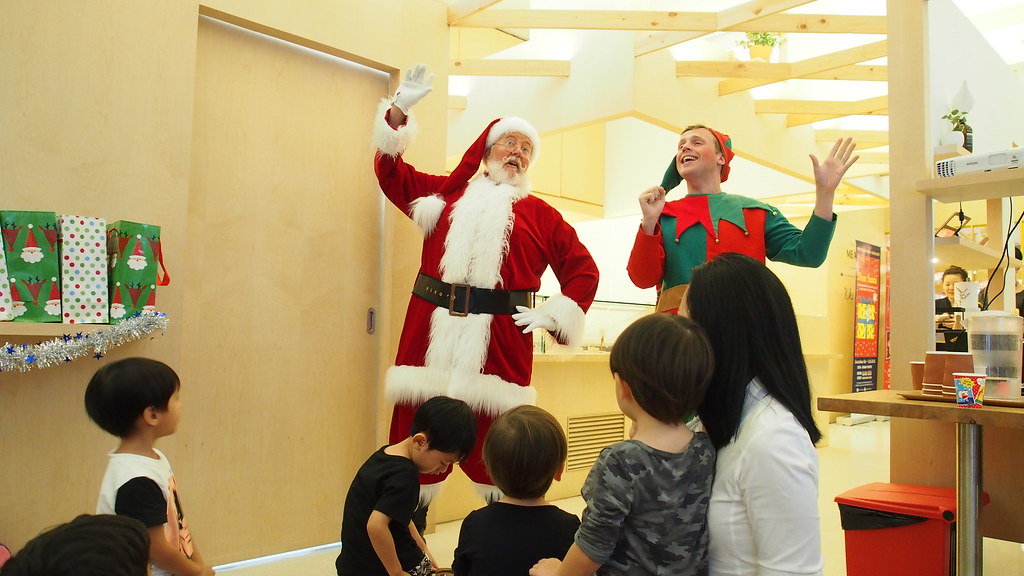 Santa singing and dancing with one of his elves – what a surreal experience.

“You didn’t know I could sing, did you?” he boomed when his number was over. But unusually observant Hunter, four, the eldest son of blogger Beverly Burgess (she has another little one named Carter, almost three), had some questions of his own. 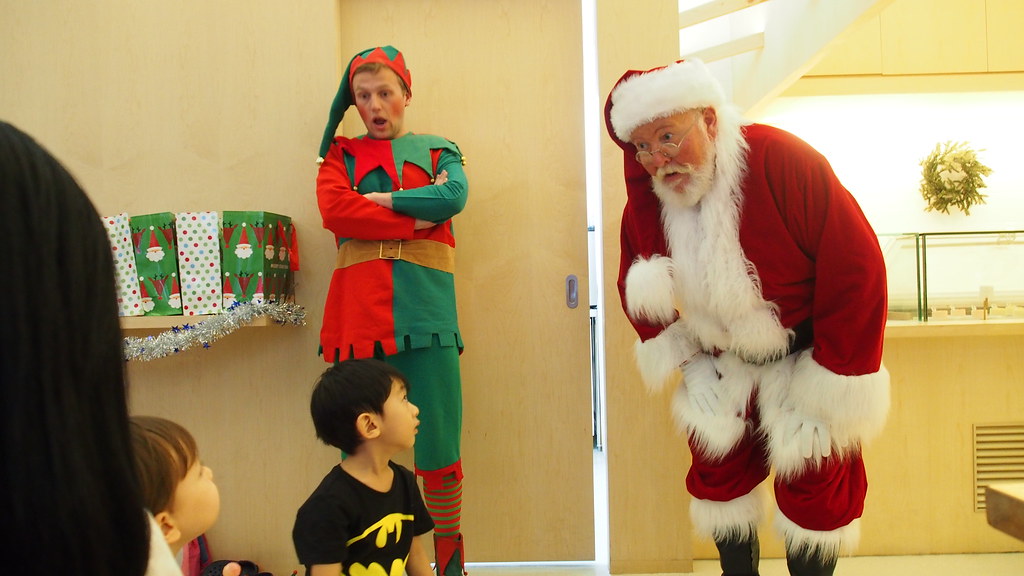 Asher knows the truth about Santa but it’s still a jaw-dropping moment when you see the man himself.

First, he asked Santa whether he was the real Santa, or some guy pretending to be one. Earlier, Hunter had told everyone that he did not need to write a letter to Santa, because he had already met him and verbally told him what he wanted for Christmas. Clearly, the difference in appearance between this Santa and the one he had met wasn’t lost on him.

“Oh no no, I am the real Santa. See, you can pull my beard if you like,” Santa said amiably. “Then I think I told the wrong Santa my Christmas wish,” Hunter replied in a small voice.

Dear Santa, what will you say now?

“Oh no you didn’t! We work together and he will tell me what your wish was,” winked Santa. “Are the two of you brothers?” asked Hunter, who seemed somewhat relieved. All that was left for Santa was to agree. Nice work, Santa! 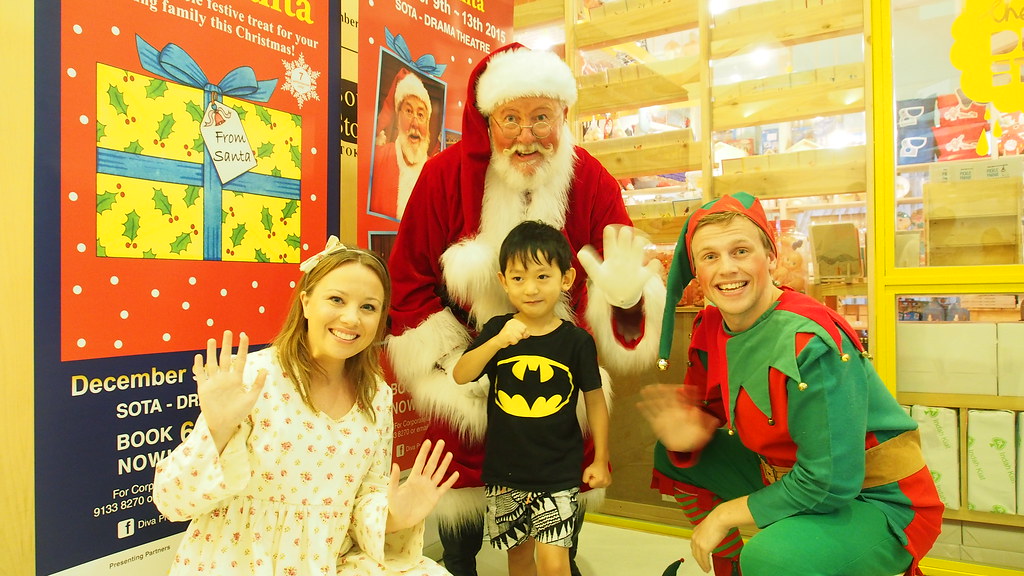 Santa believers everywhere will love Rod Campbell’s story, which is based around a child (Sarah) who writes to Santa for a special Christmas present. After searching for the perfect present, Santa finds just the right one and delivers it to Sarah on Christmas Eve.

Rod Campbell, also the author of Dear Zoo, brings the magic of Christmas to life in his newest children’s show. Suitable for children from two years old, this show consists of only one act and includes audience participation. After the show, the kids might even get a chance to meet Santa.

Book your tickets from SISTIC. 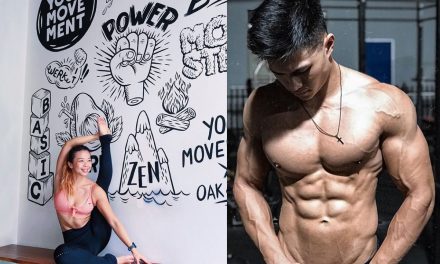 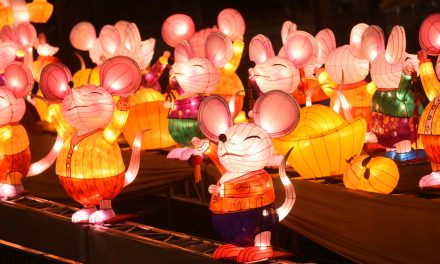