Have you heard of Clover Films?

They are a familiar name and a key player in the Singapore movie industry. Clover Films was first established in 2009 and specialises in the distribution and production of Asian movies, with an emphasis on the Singapore and Malaysia markets. They also produce movies in collaboration with regional directors and producers.

The company has grew from strength to strength since its inception, having distributed more than 100 movies, including the record-breaking Jackie Chan blockbuster CZ12, the highest-grossing Chinese movie (excluding local movies) in the history of Singapore and other high-profile movies such as Jay Chou’s The Viral Factor, John Woo’s Reign of Assassins and The Fierce Wife: Final Episode.

Clover Films also co-produced, distributed and marketed Jack Neo’s Ah Boys To Men I & II, which set an all-time record for local movies in Singapore’s history, grossing a total of more than S$14 million at the local box office. Other quality home-grown movies produced include 23:59, The Wedding Diary I & II, Ghost Child and Filial Party. 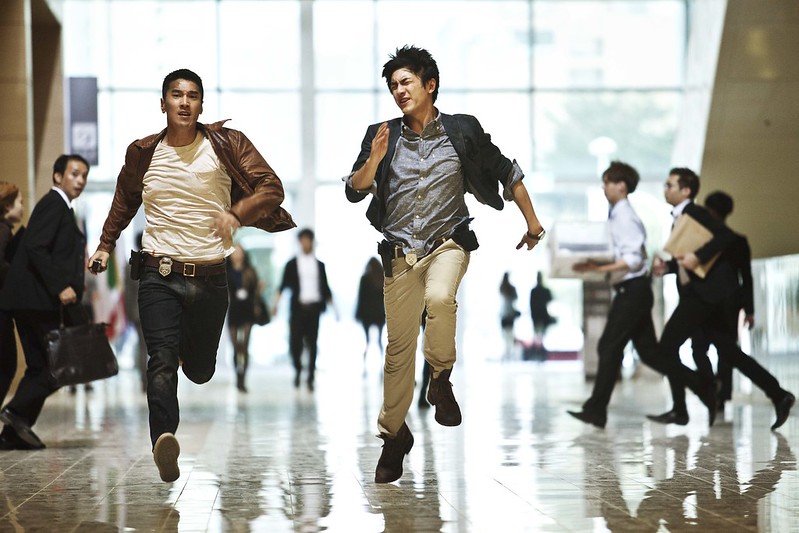 Mark Zhao and the film director, Tsai Yueh-hsun (蔡岳勳) were both in Singapore last week to promote the film, gracing the gala premiere in Singapore: 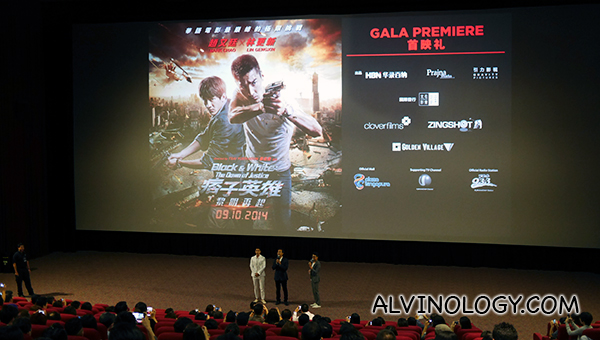 Police officer in the Southern Precinct, WU Ying-xiong (Mark Zhao), has been revered as a hero in the Harbor City ever since he stopped the terrorists on a Boeing 777 airplane and kept the city safe. Unfortunately, the peace is only temporary…

Panic spreads the whole city as a series of bomb explosions happen within hours and this is just the beginning of a tight-knit conspiracy.

Righteous and impulsive, Wu is paired up with the intelligent but arrogant loner CHEN Zhen (Lin Gengxin) to track down the mastermind behind the bombing incidents. During the investigation, they find the clues are linked to a freeway kidnapping case. Worst of all, they find the next suicide bomber is XU Da-fu, a criminal who once helped Wu solve the airplane crisis and secretly ran away with his girlfriend Qiao-qing by faking death with Wu’s assistance.

Soon Wu and Chen will discover that the bombings are just the prelude to a massive destruction. Stolen military missiles are now aimed at the Harbor City; moreover, a deadly virus is about to breakout, which is so highly contagious that it can devour the whole world in 14 days. All the chaos is planned by the Nightwalkers—a secret assassination squad which used to serve the highest government officials.

Facing the unprecedented crisis, the two-men team of totally opposite characteristics is the only hope to reverse the situation. Nonetheless, when moral standards are turned upside down, what faith should they keep to maintain the so-called justice?

The film is reminisce of Hollywood action hero movies like the Die Hard series and kind of remind me of Independence Day (1996). Two cops versus a crazy villain bent on destroying the world with his crew of evil henchmen, the plot is straightforward and it is action packed all the way from the beginning. 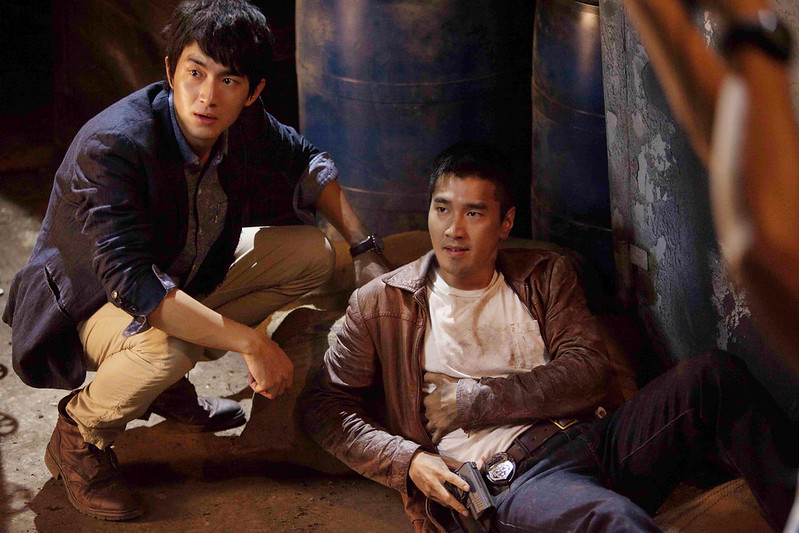 The prequel to this film is a 2009 Taiwanese drama series, Black & White (痞子英雄) by the same director, which made Mark Zhao famous. I did not watch the series, but it does not affect the enjoyment of the film much. The film is now showing in Singapore cinemas. Go catch it if you like action movies. 🙂 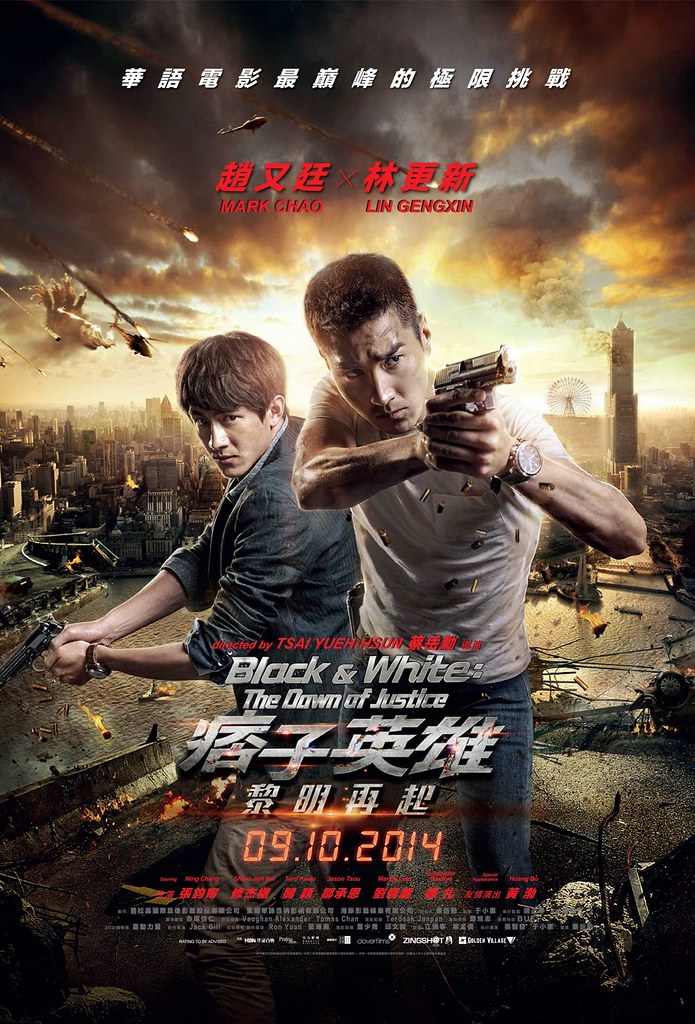 At a sharing session last weekend, Clover Films introduced some of the Asian films which they will be bringing to Singapore audience. Watch out for these titles: 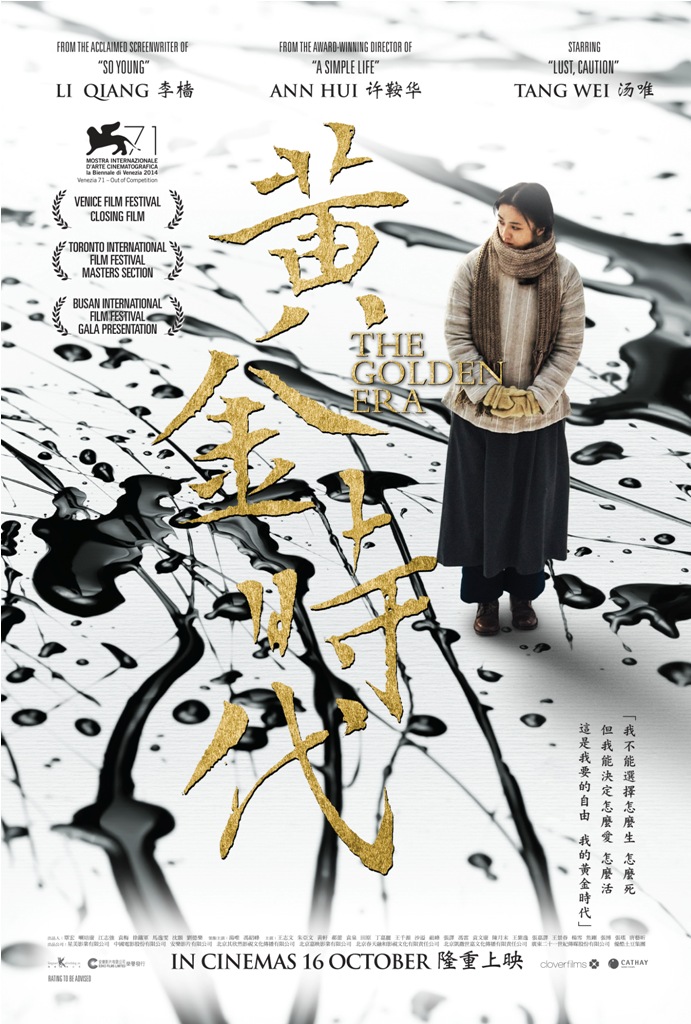 Xiao Hong was born into a land-owning family in Manchuria. Her mother died when Xiao Hong was young and her estrangement from her tyrannical father sparked a long quest for an independent and emotionally satisfying life. She was rescued from destitution by hard-drinking fellow writer Xiao Jun, but their fraught and competitive relationship brought her more heartache than joy…

BRING BACK THE DEAD 招魂 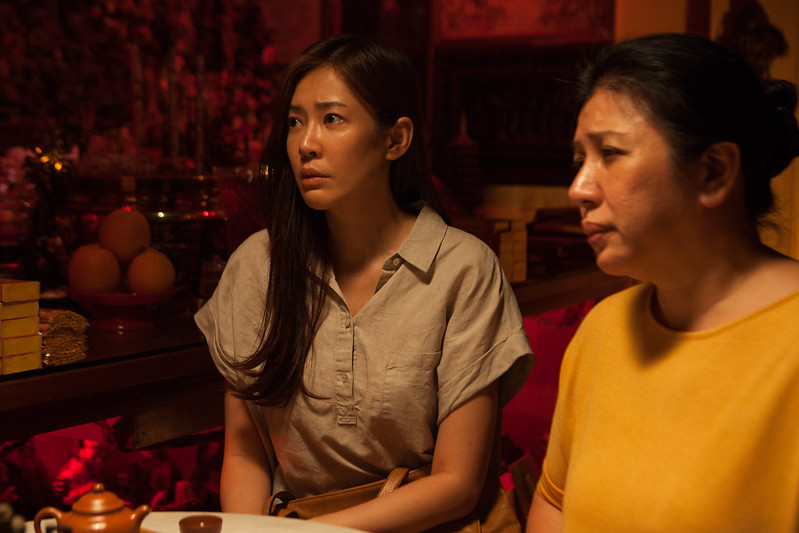 When her seven-year-old son dies in a tragic road accident, a grieving mother, Jia En (Jesseca Liu), seeks the help of her former caregiver, Mdm Seetoh (Liu Ling Ling), to bring back his soul so he can be ‘by her side’ at home.However, after several strange and deadly occurences in the house, she begins to suspect that there is something amiss with the soul she has brought back. In discovering what has really happened, she unravels the horrific truth … a truth which may cost her her life and the lives of those around her. 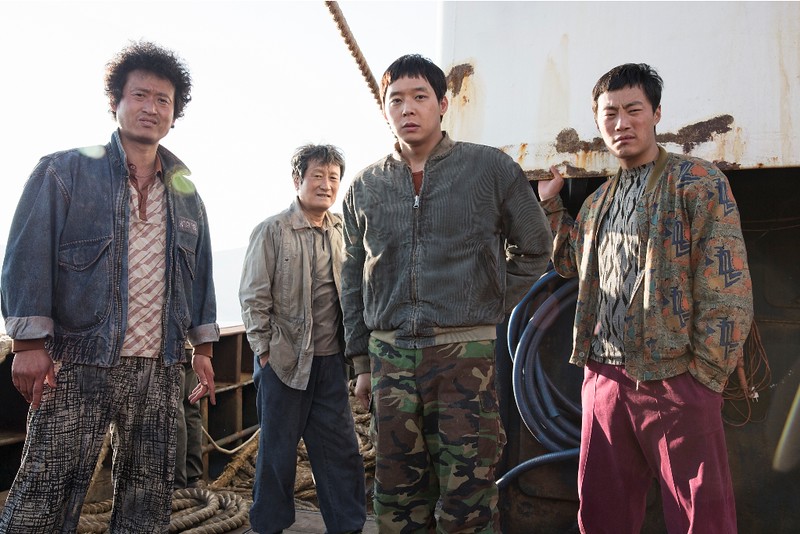 Based on true events, HAEMOO is the story of a group of fishermen who are driven into madness when their attempt to smuggle illegal migrants ends in a horrible tragedy.

Six crew members –led by the captain, is the kind-hearted chief engineer ‘Wan-ho’(Moon Sung-geun) who had an eventful life and lives hidden on the boat. To the naive and youngest crew member ‘Dong-shik’(Park Yoochun) who just started working aboard the ship recently– begin their dream of having their boat with a full load of fish. However on the open sea, they are transporting something, it is not meat but human beings!

To protect the ship and their livelihoods, Captain ‘Cheol-ju’(Kim Yoon-seok) suggests to his crew members the job in helping to smuggle [stowaways]. Numerous of stowaways who risks their lives and comes across the sea, and the six crew members who are on board a fated boat. Amid that, an unknown ‘sea fog’ to which they cannot see what’s in front of themselves comes down and they become swept into an uncontrollable accident… 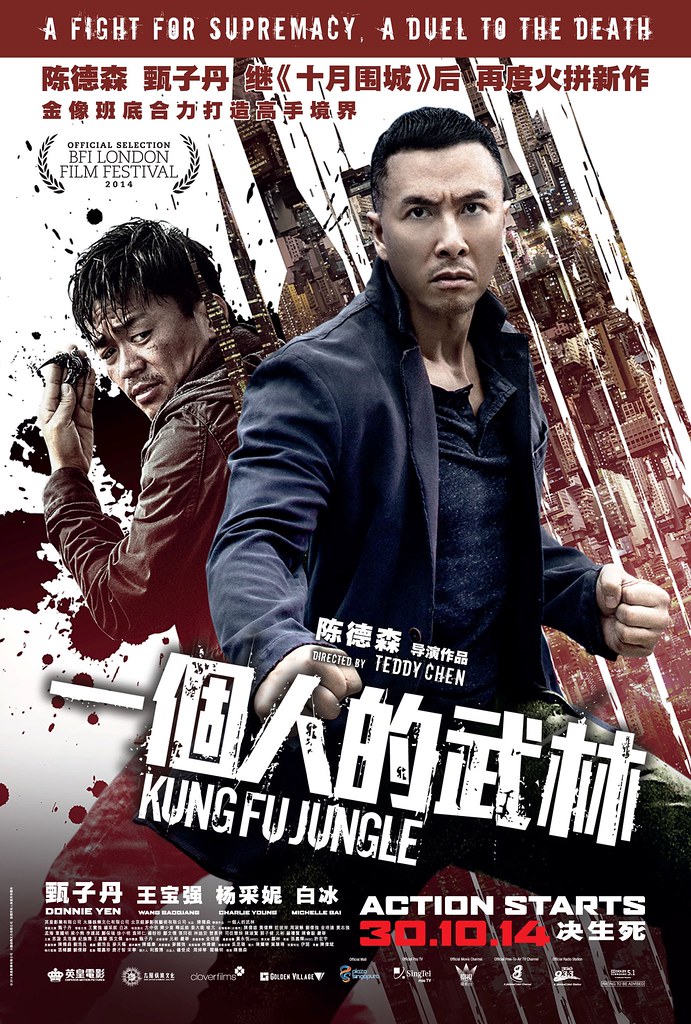 A martial arts instructor (Donnie Yen) working at a police academy gets imprisoned after killing a man by accident. But when a vicious killer (Wang Baoqiang) starts targeting martial arts masters, the instructor offers to help the police in return for his freedom. 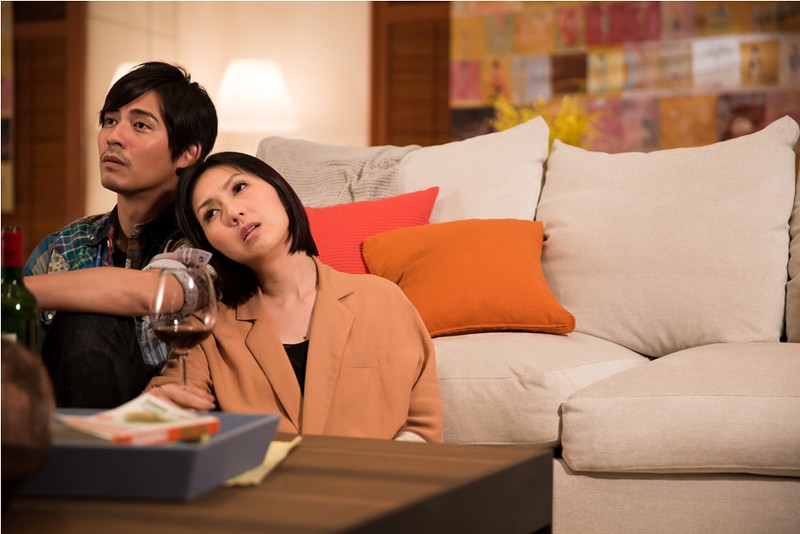 As soon as Shen Ran loses his ingénue of a girlfriend Zixin to an architect with a heart of gold, he returns to his previous life as a womanizer with a vengeance. He starts hitting on every pretty girl that crosses his path until he finally settles on the stock market maverick Yang Yang, a lady as gorgeous as she is talented… Have you been put on Leave of Absence? Here’s what happened to work pass holders and employers who…
byDanielle Ann Mention Phoon Huat and you’ll probably be thinking of baking products and desserts supplies. Well, you might just…
byContributor
Hello. Add your message here.
See how Snapask has been helping out over 3 million students around the world. Find a perfect plan