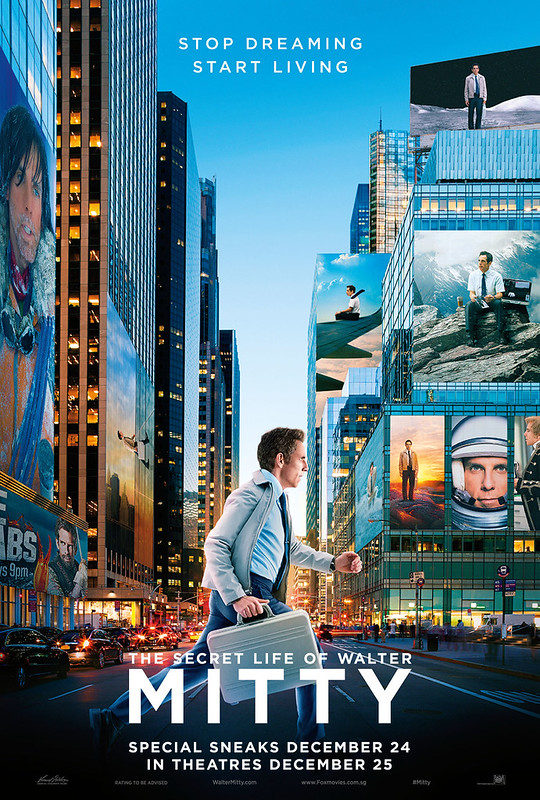 The Secret Life of Walter Mitty is the second film adaptation of James Thurber’s 1939 short story of the same name. The 1947 version was produced by Samuel Goldwyn and directed by Norman Z. McLeod, with Danny Kaye playing the role of Walter Mitty.

In the 2012 version, Ben Stiller plays the lead role of Walter Mitty and is also the director.

I have not  read the book or seen the first, but the trailer for the second adaptation piqued my interest with the beautiful scenes, shot around the world in the most picturesque of locations.

In his secret life, Walter Mitty  dreams big…really, really big. There’s no challenge beyond his grasp, be it climbing a massive glacier or rescuing a senior citizen from an exploding building. When he’s not daydreaming, the not-so-secret life of Walter Mitty is the opposite of his heroic alter-ego’s; he’s just an everyday guy facing imminent career downsizing, who’s too timid to ask out his pretty co-worker (Kristen Wiig). But when Walter faces his ultimate real-world test, he springs into action on a global adventure exceeding anything even he could have dreamed of.

It is clearly a movie targeted at the middle-age and more mature audience facing mid-life crisis.

“My life would have been so different if I have done this this this… why not just go do it now?”

The “just do it” ethos is drilled from the very first to the last scene.

We get to see Mitty jump from an helicopter into ice cold water and attacked by sharks in Greenland; escape from a volcano eruption; scale the Himalayan mountains; party with Afghanistan fighters; among many other crazy stuffs to check off an incredible “been there, done that” list.

Ben Stiller must have had a whole lot of fun flying and filming in so many exotic locations for this movie!

I walked out of the preview screening psyched up for a while to contemplate doing somethin to change the world. A few hours later, life was back to normal.

It was an enjoyable movie to me and I think most people above 30 would enjoy it. I am not too sure about younger audiences though.

The Secret Life of Walter Mitty  is now showing in Singapore cinemas. Go catch it if you need some life inspirations. 🙂

So here’s the trailer the world has been waiting for: Some of the highlights: Captain America is back!…
byDanielle Ann

Mr Gru and his minions are back.  After ditching his past as a super villain and adopting three…
byalvinology

Since its first movie in 1977, Star Wars: Episode IV – A New Hope, STAR WARS has amassed…
byKaryn Cheong
Hello. Add your message here.
See how Snapask has been helping out over 3 million students around the world. Find a perfect plan