db Bistro Moderne at Marina Bay Sands is  3 Star Michelin Chef Daniel Boulud’s re-interpretation of the Parisian classic. Among his many achievements, Chef Boulud is credited with elevating the simple burger into an art form with his creation, db Burger.

Originally from Lyon, France, New York was where Chef Daniel Boulud’s name became synonymous with fine dining. His Manhattan restaurant ‘Daniel’ is considered one of the 10 best in the world.

Chef Boulud has published six books, has a successful television series ‘After Hours with Daniel’, and is recipient of numerous honors, including James Beard Foundation awards for ‘Outstanding Restaurateur’ and ‘Best Chef of New York City’.

A week ago, I went on a journey to Provence in south eastern France with Chef Daniel Boulud’s three-course Mondays in Provence menu, inspired by one of the most famous gastronomic regions in France.

Mondays in Provence is offered at $68 per person. For an additional $32, pair the menu with regional wines.

Below are the dishes I sampled:

Next up was Soupe au Pistou, a vegetable broth with coco beans, yellow and green zucchini, carrots, cabbage, fine beans, red onions and potato; garnished with basil pesto and oil:

After the soup came Petite Farci Provencaux – Baby zucchini, baby eggplant, red onions, purple artichoke stuffed with a mixture of minced lamb and beef. The stuffing mixture is seasoned with grilled peppers, onion, zucchini, rosemary, thyme, garlic and rice. The dish is topped with bread crumbs and cooked in the oven before being served with mesclun salad dressed with Melfor vinaigrette:

A salad dish was up next. Salade Nicoise – Confit and seared tuna served on top of butter head lettuce salad consisting of beans, olives, capsicum and artichokes. Quails egg and anchovy tied olives were used as garnish:

Ravioli a la daube d’agneau and Ratatouille de Legumes – The stuffing of the ravioli consists of lamb shoulder that has been braised in red wine and lamb stock. After the ravioli has been blanched, it is glazed with rosemary lamb jus. The dish comes with a side of eggplant, capsicum, zucchini, red onions stewed with tomatoes and basil; and is served with a baked quail’s egg and crispy polenta cubes:

Desserts were up next.

The first dessert we sampled was the Apricot Clafoutis – this consists of almond tuile, honey marinated apricots, bourbon foam and almond ice-cream. The calfoutis batter is made with roasted hazelnut powder and served warm:

A specially prepared chocolate cake was served as a surprise dish. It is made with chocolate hazelnut biscuit, praline gelee, milk chocolate mousse, praline glacage and served with a cherry gel and a scoop of lemon-hazelnut ice-cream:

The meal was rounded up with some warm, petite Madeleines:

At S$68 per pax, the Mondays in Provence menu is affordable luxury the average Singapore working adults like yours truly can afford on special occasions or for a little pampering. More details on the menu and the restaurant is available via the official website. This definitely costs less than flying to Provence in France to satisfy a craving for quality French food. 🙂 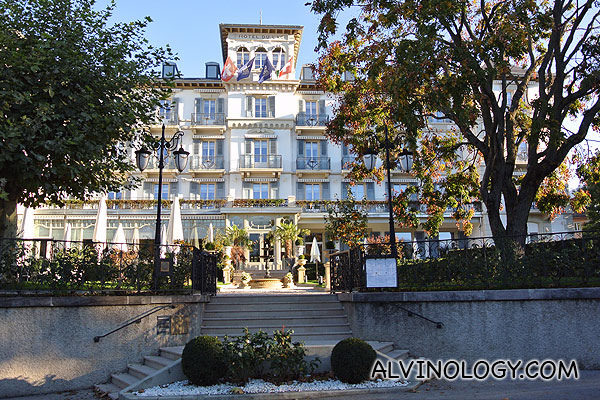 I am sure many Singaporeans heard of Nestlé, having grown up with many of their household brands like…
byalvinology

Let’s get cooking with CULINARYON

Located right in the heart of the CBD in Singapore at One Raffles Place, CULINARYON is the place…
byalvinology