Last year in June, Rachel and I went to Sydney for our honeymoon. We spent a total of ten days in Sydney; approximately half the time in the Blue Mountains suburb and the other half in the city central.

Since we had a great time in Sydney, we decided to take part in  a We Heart Sydney campaign organised by Tourism New South Wales. Here’s a list of 10 things which Rachel and I felt made Sydney… so Sydney:

The people in Sydney are very friendly. We were greeted with smiles and warmth everywhere we go. When I announced on my blog that we were going for our honeymoon in Sydney, an Australian blog reader from Sydney, Tin Lok, emailed us to arrange to meet up. Even though it was her examination period, Tin Lok took time off to bring us around, including sharing a pancake supper with the two of us; two complete strangers whom she had met for the first time that night! Tin Lok, you rock! 🙂

2. Produce sold in Sydney are as fresh as the air.

We love buying fruits and veggies at the local supermarkets and groceries. We were staying in a service apartment with kitchen space for a period. Hence a visit to the Woolworths supermarket opposite our service apartment was a must-do routine for us to whip up our own meal with whatever interesting fresh produce we got our hands on. Thereafter, we will dine in the comfort of our room while watching World Cup matches, rooting for the Socceroos (it was the World Cup season when we were in Sydney).

3. Inhale the fragrant vapour of the eucalyptus trees in the Blue Mountains.

The smell of fresh air is wonderful. Tinted with the unique fragrance of eucalyptus, it is inexplicably heavenly. Rachel and I enjoyed taking morning walks in the Blue Mountains area, enjoying nature and basking in the clean, green atmosphere.

Via Wikipedia: The Three Sisters is a rock formation in the Blue Mountains of New South Wales, Australia. Their names are Meehni (922 m), Wimlah (918 m), and Gunnedoo (906 m). The commonly told legend of the Three Sisters is that three sisters fell in love with three men from a neighbouring tribe, but marriage was forbidden by tribal law. Battle ensued, and the sisters were turned to stone by an elder to protect them, but he was killed in the fighting and no one else could turn them back.

At sunset, the view of the Three Sisters is breathtakingly beautiful. Rachel and I just sat there for a long while, admiring the view as the sun slowly set. Romantic.

5. Drink a pint of Nelson’s Blood at Lord Nelson Brewery Hotel at The Rocks. 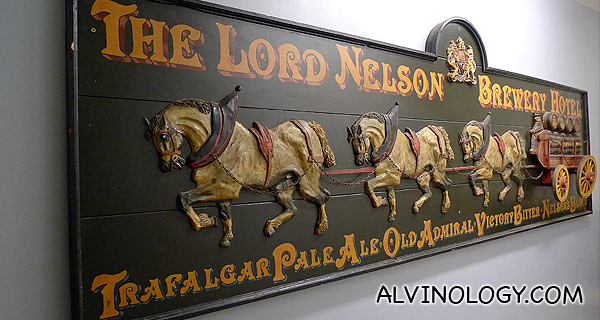 The Lord Nelson Brewery Hotel is Sydney’s oldest licensed hotel located in The Rocks, an urban locality, tourist precinct and historic area of Sydney’s city centre. Kind of like the Clarke Quay/Boat Quay area in Singapore.

Other than being a hotel, Lord Nelson is also Australia’s oldest pub brewery brewing 100% natural ales since 1985. A must-try there is their signature brew, Nelson’s Blood. The food there is pretty good too, Rachel and I are not avid pub-hoppers, but we enjoyed ourselves at Lord Nelson.

6. Experience the melting pot that is Sydney’s multi-ethnic community.

Via wikipedia: In the 2006 census, the most common self-described ancestries identified for Sydney residents were Australian, English, Irish, Scottish, and Chinese. The Census also recorded that 1.1% of Sydney’s population identified as being of indigenous origin, and 31.7% were born overseas. Asian Australians made up 16.9% of Sydney’s population. The three major sources of immigrants are the United Kingdom, China and New Zealand, followed by Vietnam, Lebanon, India, Italy, and the Philippines.

As such, there are many interesting ethnic diaspora and community enclaves in Sydney. Rachel and I met up with an old friend of mine, Xai, a Laotian who is studying for his Masters in Sydney. Xai introduced us to his group of international classmates hailing from Vietnam and Malaysia as we went on a trip together to Chinatown to eat Vietnamese beef noodle. Really “四海一家 (within the four seas all men are brothers)” isn’t it?

Seafood lovers will go crazy by the abundance of fresh seafood at the Sydney Fish Market. Rachel and I bought some fresh sashimi and ate it outdoor, for the kick; admiring the sea view while fending off the large population of mischievous, thieving sea gulls.

8. Hang out with the cool crowd at Bondi Beach.

Other than surfers and bikini babes, Bondi Beach is the place to go to for people-spotting. There are chic cafes and trendy boutiques in the area too. Even though we went there in the winter season, Bondi Beach was still teeming with cool people with model physiques who seem to have just walked out of Hollywood film sets.

Art is everywhere in Sydney. When we were there, the Sydney Biennale was going on and we got to take a free ferry ride to the rustic Cockatoo Island where a slew of artworks were exhibited.

There are also many award-winning plays and musicals to catch at the Sydney Opera House for those with deeper pockets. For those on a budget, fret not, quality street buskers are everywhere, plying their trade for your attention.

10. Take the Manly ferry to enjoy the priceless view of Sydney Harbour at a steal.

Rachel and I stayed in a cosy little guesthouse in Manly during the last few days of our trip. As such, we took the Manly ferries quite a few times, enjoying the view of Sydney Harbour from morning till night. The scenery changes with every ride and best of all, the price was a steal compared to riding on a private yacht or a tourists rental cruise.

We will be submitting our list to the “100 Things That Made Sydney… so Sydney” contest. One winner will be chosen every week (for 4 weeks) to win a trip to Sydney plus a Canon camera. Do submit your entries too at the We Heart Sydney Facebook page! 🙂

In addition, you can also vote for your favourite submissions and win Hunter Valley wine for your effort.

I will be updating on my travel experience in Sydney with day by day accounts, as how I always do it for my travel posts. Stay tuned. 🙂 This 80,000 sqft Costco-style warehouse in Singapore sells all your grocery needs at the cheapest prices

Do you know there is an 80,000 sqft, two-storey Costco-style warehouse in Singapore where you can bulk buy…
byalvinology

Have you been to Quayside Isle? It is located on Sentosa Island, within the Sentosa Cove estate, just…
byalvinology