On my third day in Hong Kong, I met up with Peter, Catherine, Ming Choy and Siew Kian in the morning for breakfast at Macau Restaurant, walking distance from the Mira Hotel.

The restaurant saw good business, with people streaming in and out constantly of their packed tables.

We ordered some of the usual Hong Kong breakfast items like the the Po Lo Bao (菠萝包) or pineapple bun; noodles; egg tarts; among other items.

The food was not too bad, but if we knew we were going for a second breakfast after this one at a better place, hosted by the HTKB folks, we would that have ate so much.

After we assembled at the lobby with the rest of the travel group, we headed to another Cha Chaan Teng (茶餐厅), Tsui Wah Restaurant (翠華餐廳) for a second round of breakfast. I was too full then, but managed to share a quarter portion of macaroni with Rachel who follewed us to pledge her support for the omy.sg teams at the Dragon Boat Carnival.

For a review on both the Macau Restaurant and Tsui Wah Restaurant, check out Catherine’s entry. 🙂

When we arrived at the Tsim Sha Tsui promenade, Victoria Harbour (維多利亞港) where the carnival was held, the bunch of us who were supposed to be competing quickly changed into our sports attire. I initially was to compete in the bath tub race, paired with a UK TV journalist. She backed out last minute, hence saving me from getting wet.

Spreaded over three days with races lined up from morning to evening every day, the dragon boat carnival is a big event in Hong Kong, seeing participation from over 12 countries and 191 teams this yet.

Celebrities from Hong Kong as well as Korea were also among the competing paddlers. We saw teams from TVB and Dream Team from Korea. The latter was responsible for attracting a large crowd of teenage fan girls, braving the summer heat to catch a glimpse of  their favourite Korean idols.

You can read more about this event via Catherine, Jerome and Lawrence‘s blog posts.

Four of the bloggers were representing the Singapore media, under omy.sg, competing against other international representatives in the bath tub race. Violet and Darren formed a team while Geck Geck and Peter formed the other.

We cheered out lungs out for them. Violet and Darren came in second while the other two capsized. Peter and Geck Geck were very good humoured about it all though, laughing through the whole incident in self mockery.

I do not have much photos on the bath tub race as I was situated at the competitor’s dock which was a distance from the finishing line. However, the other bloggers got them though. Check out Jerome’s post for a detailed report on the capsize, complete with photo evidences. Read Darren, Peter and Geck Geck‘s blog entries for their first-hand experiences in the bath tub race.

There was also a Singapore dragon boat team which competed in the dragon boat competition, the Pink Spartans. They won their race, making Singapore proud.

The Pink Spartans is a dragon boat team for cancer survivors and supporters.You can find out more about them via their official website:

Formed in May 2009 by 32 breast cancer survivors and supporters, the team’s mission statement is:  There is life after cancer. With our lives we honour those who have gone before us and who fought cancer bravely. Listen to the drum beat, follow your heart, make every stroke count. Let us unite and continue that fight.

You can watch the video coverage of the event via omy.sg, which nicely sumarises the entire event.

After the competitive event, we headed back to our hotel to freshen up. I went for a quick swim in the hotel’s gorgeous indoor pool and also took a shower in their futuristic shower room with changing lights and themes.

Rachel and I then headed out for some shopping. We discovered the yummy Gong Cha (貢茶) Taiwanese tea chain while shopping around the Tsim Sha Tsui area. They serve the best bubble tea we ever tasted. It is available in Singapore too at City Square  and Novena Square, but as usual, we get the inferior stuff in Singapore.

After shopping, I headed back to rejoin the bloggers, my colleagues and the HKTB folks for dinner while Rachel headed off for her massage appointment.

We had a rich and sumptuous dinner at the Hong Kong Old Restaurant (香港老饭店), located at Miramar Shopping Centre, just across our hotel. You can read the review of this restaurant on Catherine’s blog entry. 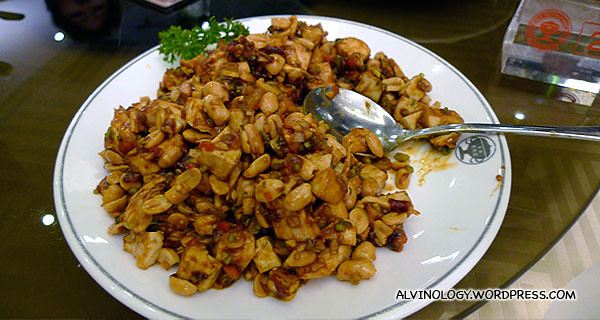 I then went to Chee Kei (池记) to look for Rachel who was enjoying a crab porridge there. As the night was still young, the two of us made our way to Temple Street (庙街) to snoop around.

We lingered there for quite a few, soaking in the vibrant night scene which Singapore is seriously lacking, sans for clubs and pubs which I do not enjoy going.

This rounded up the third day of my eventful Hong Kong trip. Stay tuned for day four whereby we visited the filming location of the multiple award-winning Hong Kong movie, 《岁月神偷》 (Echoes of the Rainbow, 2010).

Flying Off to Hong Kong in a Few Hours

Alvinology is a Mentor for YOUTH.SG’s Campus Spy Program

When the folks from YOUTH.SG approached me to mentor young web writers for their Campus Spy program, I…
byalvinology

Spotted this giant billboard of Mr Mah Bow Tan at his Tampines GRC constituency: Note how the billboard…
byalvinology