Right after our plane solemnisation, Rachel and I headed for Shantou (汕头), China, together with my parents and Rachel’s mom and sister.

We traveled together with a contingent from the Teochew Poit Ip Huay Kuan (新加坡潮州八邑会馆), a few Jetstar and Meritus staff and some journalists, including my boss Chim Kang, my colleague Han Joo and our friend, Nicholas from Straits Times.

It was the maiden flight for Jetstar from Singapore to Shantou, hence there was quite a bit of media and government attention from both Singapore and Shantou. Jetstar will become the first foreign carrier to fly into Shantou’s Waisha International Airport (汕头外砂机场) (a former military airport) and will be the only carrier to fly direct.

In the past, Singaporeans going to Shantou will have to take a flight to Xiamen or other parts of China and endure another grueling long long bus ride to get there, clocking around 10 hours in travel time. The direct flight to Shantou cuts down traveling time considerably – the plane took around 4 hours to fly from Singapore to Shantou. It took another 20 minutes to get from the airport to the city central.

Shantou, an eastern city in Guangdong province (广东省), is the gateway to Chaozhou, Jieyang and Shanwei. The Chaozhou and Shantou region is called Chaoshan (潮汕) and the main dialect spoken in these ares is Teochew. A large part of the Singapore Chinese population are Teochew, my mother being one of them.

For this trip, we followed the itinerary of the Teochew Association folks. Usually, we prefer to go free and easy for our travel, but Rachel and I considered we were traveling with four of our family members this time. Hence a planned itinerary and fixed bus rides will be less hassle for us to take care of everyone.

When we touched down at the airport, we were warmly welcomed by the airport staff with nice Tiger-motif cups for all the passengers.

After clearing the customs and collecting our luggage, we boarded the bus to New Plum Garden Restaurant (新梅园大酒楼) for lunch. New Plum Garden is a famous restaurant chain in China, something like Crystal Jade in Singapore.

Here’s the heavy lunch we had:

After lunch, we headed to our hotel, Meritus Shantou, to check-in. The staff were all lined up at the hotel entrance for a warm welcome for our contingent. There were lion dances and the VIPs were presented with large bouquet of flowers. There was also light tea reception for the VIPs to mingle with the Meritus Shantou staff.

It was free and easy time from there till dinner. Rachel and I changed into our casual gears and headed out shopping in the nearby area, together with Han Joo, Rachel’s mom and sister. I haven’t been to China for a good five years or so and was quite surprised to see how the costs of things have risen since. Although still cheaper than in Singapore, certain commodities like petrol are at the small level or perhaps cost even more than in Singapore.

For dinner, we headed to one of the many lavish banquets hosted by the local government which we will grow tired of over the next few days. The spread is really good – don’t get me wrong. However, too much of anything always kills the joy.

Check out the dinner menu:

After dinner, we went for a special performance put up by students of the over 50-years-old, Shantou Traditional Opera School. It was an eye-opener for us and perhaps a culture shock for our younger friends, Han Joo and Eunice who fell asleep in the middle of the performances.

Rachel particularly enjoyed the Teochew opera segment, featuring a scene from the popular classic, The Butterfly Lovers (梁山伯与祝英台), often referred to as Chinese Romeo and Juliet.

Video recording of the finale performance:

We went back to the hotel to rest for the night after the performance, concluding our first day in Shantou. 🙂

Stay tuned for the next update on day 2. 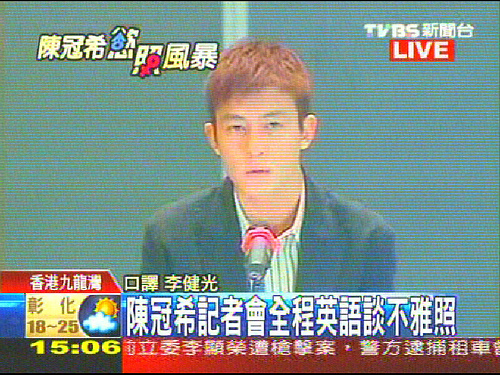 300 members of the press were present at Edison Chen‘s press conference this afternoon at 3pm. He spoke…
byRachel Chan

Recently, a guy has been accused of attempting to take an upskirt video of a female commuter on…
byStaff Writer