Halloween Horror Nights is back at Universal Studios Singapore for its 10th edition, with frightfully new experiences in store across 19 event nights.

From 30 September to 5 November, you can explore three haunted houses, two scare zones, a laser-tag challenge, macabre dining and the Monsters & Manifestations experience.

This year’s headlining haunted house pays tribute to some of the scariest moments across the past nine editions of Universal Studios Singapore’s Halloween Horror Nights.

Step into the mind of Halloween Horror Nights’ biggest and bloodiest fan, the Killustrator, and come face to face with your worst nightmares – reimagined in terrifying detail. The demented artist is determined to outdo himself as he brings to life each of his favourite moments from the previous events in Killustrator: The Final Chapter.

It is zombies galore in Operation: Dead Force as top-secret plans to prepare the world for a Zombie Apocalypse are revealed. Undergo a drastic transformation to become part of a special forces of mutant zombies to fight zombies!

Those looking for a luxurious staycation can flock to the Hospitality of Horror and tour a restored mansion once inhabited by Southeast Asia’s then-richest tycoon and his favourite wife. But beware – the mansion keeps secrets of its own.

Immerse in two spine-chilling scare zones. Astrology takes a twisted turn as the 12 Dark Zodiacs are primed by the fabled Horrorcle to harness the power of their supreme leader, the 13th Zodiac, in The Dark Zodiac.

Ghastly sightings are just around the corner with a livestream challenge to hunt and trap Southeast Asia’s most vicious spirit, the Pontianak. Retrace the steps of influencers to find out if the hunters become the hunted in The Hunt for Pontianak.

Be part of a thrilling experience that combines the exhilaration of laser tag with puzzle-solving challenges.

Escape the Breakout takes you deep into the facility where the world’s deadliest criminals serve out their sentence. Witness a new shock therapy as they are kept behind bars – but not for long. Outfitted with laser tag gear, teams of five will have to solve twisted puzzles to escape the clutches of the blood-thirsty villains.

Enjoy the laser tag experience with an add-on price of S$38.

Indulge in a deliciously wicked meal in Die-ning with the Dead, replete with ghoulish entertainment. Savour a truly sensorial experience as the horror-themed meal is paired with a comically cryptic journey into the other realm by the Spirit Medium and his creepy Henchmen, in search of the fabled MissFortune.

The dining experience at KT’s Grill is available with a S$105 top-up.

Go on a tour hosted by The Keeper, where you can witness the magic behind various technical and sensorial effects, snap some truly ghastly photos, as well as enjoy a spooky performance.

The Monsters & Manifestations experience can be enjoyed with an add-on price of S$38.

Regular tickets are available at S$78 for peak nights and S$68 for non-peak nights per guest.

The Frights for Four bundle deal of 4 tickets is available at S$388 for peak nights and S$338 for non-peak nights. The bundle comes with perks including early entry to the park at 5pm and a Halloween Horror Nights set meal.

For an even more exclusive experience, sign up for the R.I.P. Tour, which includes Halloween Horror Nights Express Unlimited for haunted houses and rides, Die-ning with the Dead and Monsters & Manifestations. The tour is available on both peak and non-peak nights at S$288 per guest. You can also enjoy many of the theme park’s exciting rides and attractions during event nights.

Enjoy savings with every two tickets booked when they pay with Mastercard and save with every regular ticket booked for Maybank Singapore and Malaysia cardmembers.

Ask any avid Chinese theatre goer about Lao Jiu, it will surely ring a bell. After all, Lao…
byAnson Ong

Kam’s Roast is launching its second outlet in Singapore at Jewel Changi Airport! This marks the first time…
byIrone Kim 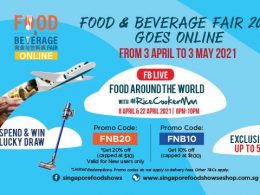 [PROMO CODE INSIDE] Enjoy 10% – 20% OFF as you feast on this year’s Food & Beverage Fair; Don’t miss the weekly giveaway!