On 15 June 2022, some 3,000 partygoers were treated to sight for sore eyes at the Pasir Panjang Power Station, with the launch of Heineken Silver at the highly anticipated Heineken® Silver Smooooth Warehouse Party! For one night only, the compound was transformed for a night of fun and games.

Upon arrival, even without entering the building, it was definitely exciting to see the exterior bathed in bright green lights. The crowd was also astonishing to behold and the snaking lines somewhat brought about a nostalgic reminder of post-COVID-19 clubbing days.

After donning paper wristbands and stepping into the giant space, what first caught my eye was the selection of retro arcade games that were free for all attendees to play. The bright, neon lights and easily recognisable games attracted quite a crowd, with some even vying for the top spot at the air hockey table!

Right next to the games section, one could also see a relentless queue for the best photo opportunities at a neon star booth.

Of course, I could not wait to try Heineken’s latest beer – and I was not disappointed! As a light drinker, I was pleasantly surprised by the refreshing flavour of Heineken Silver. Unlike Heineken’s other beers, it offers a daintier flavour and was extremely easy to drink. It indeed lived up to Heineken’s aim of creating a uniquely smooth beer experience. In fact, this beer would be perfect for a chill day at the beach!

Heineken Silver is targeted at the younger consumers with its smooth taste as Heineken seeks to cater to Singapore’s evolving drinking culture. Attendees of the party were able to experience the drink for themselves as well with 2 complimentary beers being included in their $40 ticket, and more readily available at the party’s pop-up bars at $7 a can. Many could be spotted enjoying the Heineken Silver at the Smooth Lounge, where seats and standing tables were scattered around.

The food options at the party certainly did not disappoint either, with three food trucks serving long queues.

I had my first taste of plant-based nuggets at The GoodBurger’s food truck and was pleased to find that the nuggets regain the chewy texture of the meat-based nuggets we’re used to. At $6 per tray, they were the perfect light snack to pair with the Heineken Silver.

Savoury bites such as the Thai Basil Chicken & Sweet Chili Sausage ($10) from Sidecar Sausage and Chicken Teriyaki Sticks with Bonito Flakes ($12) from Oishii were also great snacks to chow on to prevent the pesky Asian flush from sneaking up on me!

Featuring an international line-up of music artists, the main dance floor progressively filled up over the course of the night as partygoers grooved to the beat. Flight Facilities(AU), Palms Trax (DE), Floyd Lavine (ZA), and Ice Cream Sundays(SG) took the crowd by storm amidst the flashy lights and smoke machines.

It was indeed a night to remember as the large crowd marks not only the first of such large-scale party events this 2022, but also a celebration towards the easing of event restrictions and the increasing move towards the new normal. The popularity of the event showed through in its sold-out sales as well as the excitement that could be felt in the air at the warehouse. However, those who were unable to attend need not feel FOMO as Heineken Silver intends to unleash more exciting activities over the next few months to celebrate music, taste and fashion – keep a look out for upcoming ones on Heineken SG’s Instagram page!

From late June, Heineken Silver will also be available for purchase across e-retailers, followed by all major
supermarkets, convenience stores and select bars and restaurants island wide from mid-late July. Heineken
Silver has an RRP of S$20.95 for a pack of six (320mlcans). I attended the 12th annual KKBOX Music Awards (第12屆KKBOX風雲榜), held in Taipei Arena, Taiwan over the weekend. Every…
byalvinology We all take pride as our very own Chef Janice Wong from Singapore launches her partnership with Harrods,…
byShiela 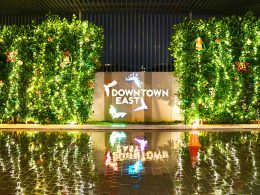 Downtown East is a colourful place to be this Christmas – featuring new life-size gumball, Dinosaur Adventure Park, and Xcape Park!

Downtown East is giving you all the fun you’ve missed, ramping up this year’s Christmas celebrations with three…
byIrone Kim

During my son’s school holiday in early April, my family and I flew to Ho Chi Minh City…
byalvinology