Singapore’s biggest female entertainers will come together for Superwomen in Concert, a fundraising concert by AWARE on Friday, 10 April 2020 at Esplanade Concert Hall.

Mandopop icon Stefanie Sun will headline the all-female, all-star show, alongside an array of local legends such as:

This vibrant, diverse line-up will also feature some family pairings:

Actress-presenter Nikki Muller and director Beatrice Chia-Richmond will be hosts for the night. Supporting the female talent will be a 15-piece, all-male group from the Metropolitan Festival Orchestra, led by Music Director Julian Wong.

Superwomen in Concert is part of AWARE’s 35th-anniversary celebration in 2020. Proceeds will benefit AWARE’s Women’s Helpline and Sexual Assault Care Centre services — integral parts of the NGO’s wide-reaching work towards gender equality. This year’s concert comes 10 years after the first edition of Superwomen in Concert, held in 2010 to mark AWARE’s 25th birthday.

Tickets for Superwomen in Concert will be available to the public at two levels: At this juncture, I believe youth is not wasted on the youth, since it provides the rest of…
byDanielle Ann 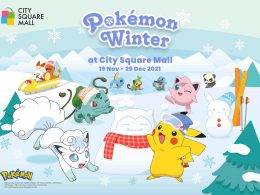 From 19 November to 29 December 2021, all Pokémon lovers will be treated to a memorable Christmas with…
byIrone Kim