Scoot launches its inaugural flight from Singapore to Laos, marking the start of its three-times-weekly flights from Singapore to Luang Prabang and Vientiane. These routes were transferred from sister airline SilkAir, the regional wing of Singapore Airlines, and will be operated with Scoot’s A320 aircraft.

@flyscoot launched its inaugural flight from Singapore to Laos yesterday, marking the start of its three-times-weekly flights from Singapore to Luang Prabang and Vientiane. To celebrate the maiden flight, traditional Laos music was played over the sound system in the aircraft and passengers were quizzed on their knowledge of Scoot and Laos to win prizes. Upon landing, the planes were greeted with traditional water canons at both airports in Luang Prabang and Vientiane. Swipe for a preview. #flyscoot #luangprabang #vientiane #laos

Scoot is now the only airline offering direct Singapore-Laos services. Scoot’s flight schedules Singapore to Laos and vice versa are listed below. All local times.

To celebrate Scoot’s maiden flight to Laos, traditional Laos music was played over the sound system in the aircraft and passengers onboard were tested on their knowledge of Laos and Scoot.

Upon landing at Luang Prabang Airport and Wattay International Airport in Vientiane, the A320 aircraft, named Yellow Tail, was greeted with a traditional water cannon salute at both airports. The flights operate on a circular routing departing from Singapore for Luang Prabang, followed by Vientiane, before heading back to Singapore. 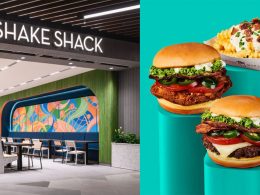 To celebrate the opening of Shake Shack Great World on 28 April, Shake Shack Singapore will debut the…
byIrone Kim

#SlideandSwivel Challenge: Show your Original Dance Moves on TikTok and win a Samsung Galaxy A80 plus exclusive BLACKPINK merchandise

TikTok is teaming up for the first time with Samsung to launch #slideandswivel, a dance challenge that celebrates…
byIrone Kim

SHIBUYAPARCO first opened in 1973 to contribute to business incubation, urban revitalization, and trends communication. it sought to…
byIrone Kim Black Friday has evolved from American Thanksgiving to becoming the year’s most anticipated shopping extravaganza around the world.…
byIrone Kim