Do you have what it takes to survive your latest nightmare at Universal Studios Singapore (USS)?

Under the ominous glow of the full moon, the seventh edition of Halloween Horror Nights (HHN7) is already underway, and it proves to be the most elaborate and haunting one yet. Themed ‘7 Deadly Sins’, the event features a twist to the cardinal sins as we know it, characterised by ‘The Sinisters’: Cruelty, Deception, Malice, Manipulation, Narcissism, Obsession and Perversion.

‘The Sinisters’ lord over five haunted houses and two scare zones, each with a horror story of its own to tell. Most notably, the dynastic period ‘Terrorcotta’ is one of the lengthier haunted houses that will scare the wits out of you with the evil empress, while the brand new ‘Make The Cut’ haunted house invites K-Pop enthusiasts to explore a grotesque world of Gore-Pop inside a sequence of guest houses, recording studios and discotheques. This year’s HHN7 also introduces a new game called Zombie Laser Tag, where participants can battle each other in teams of four on zombie infested grounds.

The real icing on the cake are the two stage performances that would have you on the edge of your seat, so to speak. Down the entrance of Universal Studios, a fenced concert stage promoting the ‘Slit Face Girls’ (an undead K-Pop girl band) world tour will draw you in to a scintillating choreography. In case you need an intermission in your consecutive haunted house trippin’, there are three different show times for you to catch them strut their stuff and belt out energetic hits, replete with a beguiling twist…

The other must-see show, which would surely give the ‘Slit Face Girls’ a run for their hell notes, is ‘Laboratorium’; the premise of the show runs on a whacked-out plague doctor, who uses his captives as test subjects for his ‘elixirs’ during a time of ‘Black Death’. Fret not, we’ll keep the spoilers to a minimum, but the acrobatic class acts will surely leave you aghast that the human (dead) body is capable of otherworldly feats.

It does not take much to realise that a boat load of creative efforts has gone into the making of HHN7. And with a sensation that blurs the boundary between a fantastical nether world and reality, you know that Singapore’s biggest Halloween extravaganza has delivered big time.

Whether you are a teenager who lives for the night, a clueless lover seeking fresh date ideas or an organisation looking to bond co-workers over a scream fest, HHN7 could be it. Take it from the team here at Alvinology–if not the pictures here—who survived all five haunted houses with tighter knit and rougher throats. HHN7 at Universal Studios Singapore continues to run every weekend until end of this month. Check for availability and pricing details and purchase your tickets here. 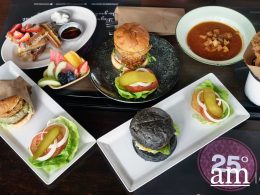 Burger fans would not want to miss this. Reputed for their signature gourmet burgers, 25 Degrees Singapore recently…
byalvinology