Billed as the world’s highest urban craft-brewery and modern kitchen, LeVel33 at Marina Bay Financial Tower 1 recently introduced new items to their menu, wholly inspired by their signature craft beers, to give you the full sensory assault when dining at the establishment.

The beer served at LeVeL33 are all brewed at the inhouse microbrewery, curated by LeVeL33’s Argentinean native and German-trained, resident brewmaster Gabriel Garcia. The modern European cuisine served on the menu are prepared by British-born, France and Australia-trained Exective Chef Jimi Tegerdine. As a form of respect for the team’s commitment to the brewing process of the craft beer served at LeVeL33, the dishes are carefully curated by Chef Jimi to elevate the drinking experience. Here are some of the dishes I sampled at a recent tasting, with mention of the recommended beer to pair each item with.

The standout items on the menu for me were the two starts, the Kangaroo main and the Butternut Squash side.

The two starters were both seafood items, served with strong, contrasting flavour to get rid of the fishiness. Use of tangy elements like lime and blood orange added an extra punch to the overall taste, not to mention that the plating were lovely.

Some of my Australian friends would call the kangaroo a “giant rat” and would shy away from eating it. I have tasted kangaroo steak on many occasions and it tend to be a little too tough and chewy most of the times. Chef Jimi’s take is coal-baked and served with beetroot and turnip puree. The meat is moist and pretty tender, almost like a good cut of beef. Pretty good for a giant rat.

The Butternut Squash is just a regular side, but was delightfully good that I had an extra serving. The pumpkin slices are deliciously prepared and goes ery well with the miso flavour.

LeVeL33 was in the press lately because of celebrity chef Gordon Ramsay’s harsh comment on one of their bar bite item named “Fish and Chips” which many online commentators felt was just “ikan bilis with a few fries”.

Chef Jimi stood firm by his dish though. Rightfully so as the dish is really just a bar bite from their Beer Dining menu, priced at S$13. The name was probably a little tongue-in-cheek.

In any case, the food is much better than the wrong impression most Singaporeans would have because of the Fish and Chips episode. The menu is on the pricier side, but it is considered reasonable in the Marina Bay area for the F&B quality, not to mention the spectacular rooftop view: 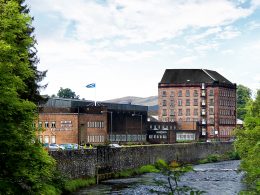 The first-ever Whisky Journey event is happening in Singapore this 11-20 December – Everyone can join the tour around bars and distilleries for just $32! Another Star Awards means another funny set of photos from red carpet fashion roaster Dennis Lim. If you…
byDanielle Ann