In our previous post, Wickstrom said that he went to queue before opening at the Michelin Star hawker stall and expected a wait of 20 minutes because of the length of the queue which was fifteen people. Long lines are expected at this hawker stall thanks to it’s reputation and the one Michelin Star awarded.

He ended up waiting for more than an hour, though, when two persons in front of him in the line ordered 60 meals each and distributed the packages to men in yellow uniforms, who seemed to be advertising hawker stall delivery services.

We got in touch with Wickstrom, who has traveled regularly to Singapore since his parents live here. See the interview below:

It says on your profile that you study in Europe. Why were you visiting Singapore at the time?

My parents have lived in Singapore for a number of years. This is certainly not my first visit to Singapore. I come here as often as I can because Singapore is an amazing place and I absolutely love it here! Due to my studies in Scotland and Sweden I have been unable to visit as much as I’d like but I’ve made sure to visit two times per year in the summer and winter months.

While I would not compare my knowledge of Singapore with the locals I am not really your regular tourist as I have spent a fairly large amount of time here.

What were the reactions of the other people in the queue when the large orders were placed?

I don’t know if anyone else really took notice, but if they did they didn’t make any noise about it in public as far as I’m aware. There was a mix of tourists and locals in the line.

I think the reason people didn’t quite realize is that the orders came from people in plain clothing and was then picked up by the yellow shirts with company advertising on them.

The thing to remember about this particular Hawker stall is that people are mentally prepared to wait, and the line moves slowly even when serving regular customers so it’s less of an immediately noticeable stop in the line, it just kind of stops moving completely and since people are already mentally prepared for a long wait perhaps the complete stoppage of the line doesn’t feel that out of place in their mind.

Did you bring up your concern regarding the queue with the hawker stall employees? If you did, what was their response?

No, at the point that I got my order I was thoroughly pissed off and hungry so I just sat down and ate what turned out to be an okay but very disappointing meal. Besides, they were busy, I doubt they would have taken the time to answer my complaint and I didn’t want to hold up the line for people behind me who also were affected by the catered orders that were in front of me.

As I wrote before in the original piece, the catered orders didn’t come from people advertising that they work for a Hawker pickup service. Why would they not wear company shirts? It would probably piss people off to end up just behind the guy who is going to put down an order that takes 30 minutes to fill.

Despite your experience with the long queue, what did you think of the Soya Chicken meal?

I was rather disappointed to be honest. The whole marketing ploy with the Michelin star and the usually 2-hour long queue had raised the expectation of the food to a really high standard. Even after the catered order ordeal I expected it to be amazing, why would they otherwise get a star? But it was your run of the mill noodle and duck, rice and pork etc.

It felt like any shop that sells these items could recreate it, and I’m sure they do and some with a superior quality as well. Soy Chicken was bang average. It tasted good, but did not really stand out. But then again, do you expect people to stand in a 2 hour line for just good food? No you stand in line to get incredible food, certified as such with a Michelin star.

The only thing I was really enjoying was the bean sprouts! Delicious! But then again, Michelin star worthy? I’m not a food critique, but I know my food and I highly doubt it.

When did you write your opinion piece? Directly after the experience or at a later time?

I said jokingly at the time that I was gonna write to someone about this but then I went on with my day. I forgot about it for a day but then on the 6th we started talking about it again and I realized that I was in fact still a bit pissed off about the whole thing and that I had forgotten to write the piece.

I wrote the piece on the 6th (of July), didn’t really put that much effort into it, took maybe 39 minutes to write and then 30 minutes of figuring out who to email it to.

How did you decide on the list of recipients of the piece? How did you send it?

I started by sending the email to every email address I could find on different newspapers in Singapore. After I sent that off I googled what the biggest food blogs in Singapore were (I don’t follow blogs in general so I have no idea who is popular etc.) and sent it to the people on a random “top 20 hottest food blogs” list.

In total maybe 60 email addresses were sent my original email. Feel free to print the original email as well, not just the article itself, if you feel like it.

This interview has been edited for readability. 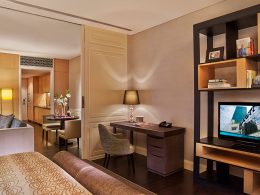 In a video that’s garnered almost 300,000 views and has been shared 77,000 times, an Indian family can…
byDanielle Ann Who is Molly Zhao Yusi? Is her billionaire dad Singaporean?

Molly Zhao Yusi, the 17-year-old figuring in just another facet of the scandal rocking the United States’ university…
byDanielle Ann