One neighbour has tipped off Chinese newspaper Lianhe Zaobao about a near-daily sighting she found intriguing.

Ever since Mediacorp artiste Elvin Ng and his family had moved to a three-storeyed semi-detached property few months, Romeo Tan has been spotted visiting Ng almost everyday. He even stayed in at Ng’s house frequently. This was an account given by the neighbour who tipped off Lianhe Zaobao.

Curious, the neighbour commented, “Regardless of how far they stay from the TV station, other artistes return to their own homes. Furthermore, these two [Elvin Ng and Romeo Tan] have their own families. Despite that, why is Romeo Tan going to another artiste [Elvin]’s house practically every night, and even staying in?”

When a reporter from Lianhe Zaobao asked about it, Ng didn’t take to it nicely. In his exact words in Mandarin, he responded with, “This question is already infringing on my privacy! Have I hurt anyone? If I were to have a house party, do I need to report who I’m inviting? While I’m at it, do I also need to report how many times do I bathe in a day?!”

On the contrary, Romeo Tan appeared to be more composed when the reporter approached him on this issue.

The local actor commented, “Thanks everyone for your concern. There’s absolutely no issue with us, which part of it isn’t normal? Is the reader who tipped you off complaining about my parked car blocking their way? In fact, when I am there, I’d usually greet the neighbours.”

Elvin and Romeo have always been good friends

This may not come as a surprise as it is widely known that Elvin and Romeo have been the best of buddies, be it in the entertainment circle or in the public eye.

Romeo even confessed, “Amongst all the male artistes, the one whom I trust the most is Elvin. When it comes to female artistes, it’d be Rebecca Lim. Yes, I did stay over at Elvin’s house but that is because I had to go for filming the next day. Besides, it’s only a eight minutes’ drive from his house to the TV station. It’s much nearer as compared to my house located in the East.”

“Actually, I’m not the only one who has stayed over at his [Elvin’s] place. Rebecca Lim and Ian Fang have both stayed there before,” he added. Further, he also said, “As for staying over at Elvin’s place, so long our parents don’t find that an issue, outsiders needn’t meddle.”

The actor who plays the role of “Xu Longbin” on When Duty Calls also said that when he was studying, it was common for him and his male friends to stay over at each other’s house. Hence, he grew to have such a habit of doing so and there was also another reason for him staying the night at Ng’s place – he lacked privacy in his own home.

Besides his parents, Tan lives with his brothers, sister-in-law, two nieces and nephews in a four-room flat, so it is pretty cramped up. Even till now, he remarked that he still needed to share a room with his younger brother. Thus even in his own room, he doesn’t have privacy.

Romeo needs a quiet place to memorise his script

Since Ng didn’t mind Romeo staying in the former’s guest room, Romeo expressed that he was pleased to stay in the room, especially when he had to familiarise himself with the script for filming the next day and needed a quiet environment. He even chuckled and exclaimed, “Anyway , my parents know where I’m!”

When the reporter asked whether if Romeo would pay rent, the Mediacorp artise replied, “Elvin’s parents treat me very well and they aren’t calculating but I’ll buy food and some essentials for them whenever I visit them.”

As for his future plans on having his own home? He answered, “My elder brother has already applied for a flat. I am rather generous with my parents and I usually spend quite a lot so I don’t have sufficient savings. At the moment, I don’t have the ability to have a place of my own.”

Previously, Ng encountered a callous contractor while renovating his home and his close pal Romeo suggested an idea to get him out of the sticky situation. Tan laughed saying, “I even helped Elvin to set up his desktop et cetera!”

When the reader who tipped Lianhe Zaobao off was approached, she defended herself saying, “As popular artistes, it is inevitable that their [both Elvin Ng and Romeo Tan] every action is being watched. When the sighting of Romeo Tan entering and leaving Elvin Ng’s residence happens almost everyday – and we [neighbours] witness this in a public space, it doesn’t count as violating one’s privacy.”

These days, privacy is a word that gets thrown around a lot – especially when it becomes easier to retrieve information about an individual or even a stranger online. Given the increasing accessibility of social media that can reveal a substantial portion of your life, what exactly defines privacy?

At the end of the day, privacy is a fine line you have to tread upon carefully. 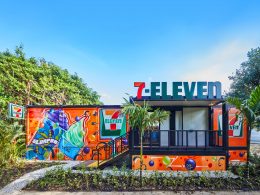 [BIG SALE] Here’s a list of every sale and promotions you shouldn’t miss this March as Lazada turns 8! The Starbucks + ban.do collab will make you wish it was summer all year long

Recently, Starbucks has teamed up with various lifestyle brands to create merchandise lines that are both functional for…
byStaff Writer

Taken at around 7pm, Potong Pasir. The splash of colours made Rachel and I very happy. I quickly…
byalvinology