Watch lovers, you might want to watch the Bell & Ross space. The Swiss watchmakers have released a host of exquisite timepieces (with more launches staggered over the remainder of 2017) that go extreme on three frontiers: sky, land and marine.

As we know it, the trademark round face in a square case captures Bell & Ross’ longstanding passion for aviation, and the new additions to their BR 03 family reaffirms the deep relationship they have with elite air forces. Bell & Ross has also plunged into the opposite end of the horizon to revive their diving watch –the world’s first square cased one at that. Rounding up their ‘Search of Extreme’ philosophy is the RS17 collection which celebrates their partnership with Renault Sport Formula One team.

But there is still one more frontier that Bell & Ross has signaled their intent on. Until now, no notable timepiece has been made for the women’s market, and their diamond encrusted Novarosa collection looks set to seduce the hearts and minds of many a lady.

Without further ado, let us then do a quick highlight reel of Bell & Ross’ 2017 Baselworld collections presentation.

The BR 03 is Bell & Ross’ core collection influenced by the field of aviation. The two new additions, the Horograph and Horolum, continue to pay tribute to air travel; both timepieces adopt the Bauhaus ideology of ‘shape induced by function’ and feature simple lines and right angles, for the purposes of efficient time telling.

The Horograph goes full utilitarian by taking cues from airport terminal clocks, whereas the Horolum is capable of a brilliant tinted green illumination thanks to an ultra-phosphorescent Superluminova coating. The glow on the dial stays lit seconds after the passing of light, and Bell & Ross credits the feature to airport runways during nightfall –said to be one of the most beautiful sights from the cockpit.

Only 500 pieces of Bell & Ross Horolum are produced.

The Formula One RS17 Trilogy 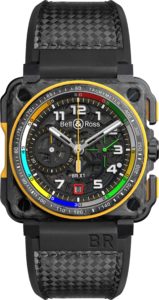 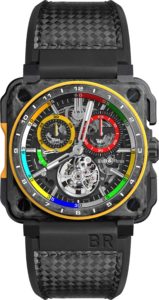 When you own one of these timepieces in your personal collection, it is like wrapping a F1 steering wheel around your wrist. Last year, Bell & Ross became an official partner to Renault Sport Formula One Team in their pursuit of extreme performance. This year, they are going the distance with the partnership by releasing a trio of timepieces inspired by the yellow Renault single seater RS17 F1 car.

Perhaps the most distinctive feature upon first glance is the myriad of colors surrounding the dial; just like what you would see on the steering wheel of a F1 car, Bell & Ross has ported over the same color coding element to the watches in a bid to facilitate instant reading of time in high octane environments. Each function is paired with a color. For example, in the RS17 chronograph watches, the time, chronograph, date, second and power reserve each has their own vivid hue for easy, mistake-free identification.

The BR 03-94, BR-X1 Skeleton Chronograph and BR-X1 Tourbillon Chronograph have only 500, 250 and 20 pieces produced respectively. 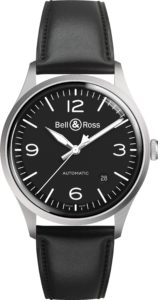 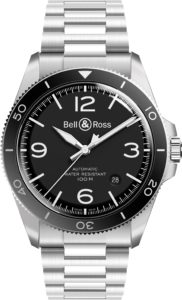 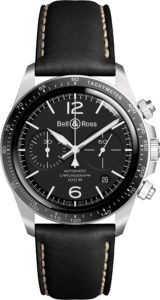 Bell & Ross’ love for aviation continues to feature heavily in the Vintage family, albeit with round casings for a touch of timelessness. The BR V collection have gone through three generations to result in a more sophisticated bezel and casing, and it has also slimmed down a notch for better comfort. Exclusive partnerships with air force regiments around the world see a colored insignia embellishing the dial above the 6 o’ clock mark, but that is not the only redesigned feature in the Vintage.

In the new BR V1, the counterweight for the second hand is shaped like a stylized plane profile, something that promises to be even more prominent in future productions. As for the BR V2, it now comes in a polished and satin-finished steel bracelet for a look that is both contemporary and sporty, while the pared down black dial retains the iconic aeronautical characteristics.

In Too Deep With BR 03 Diver 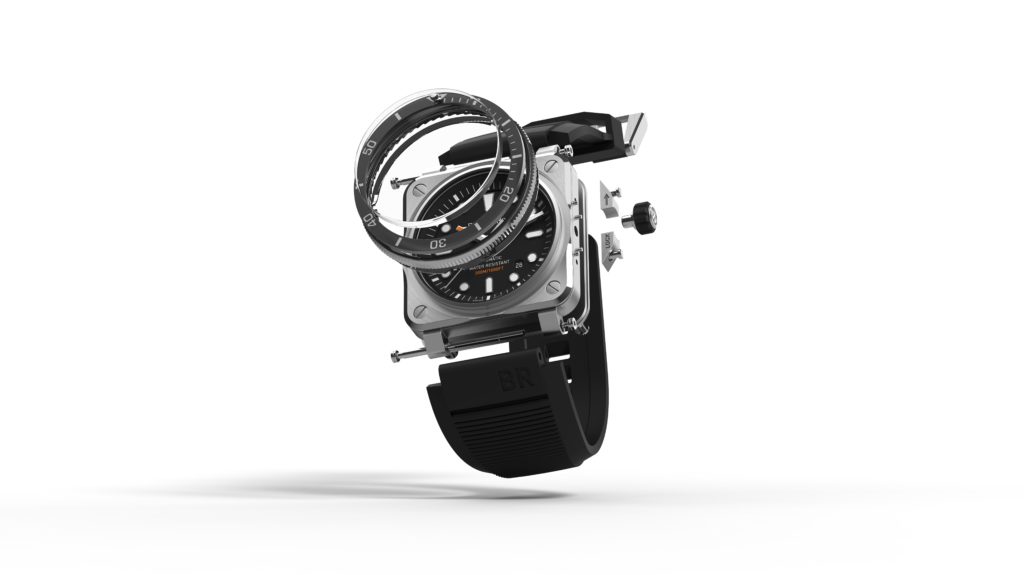 Among the new launches by Bell & Ross, the BR 03 Diver represents the Swiss watchmaker’s aspirations to take its ventures deep into the blue. This is the first ever square faced diving watch in the world. It started with the HYDROMAX that was capable of withstanding an astounding 11,100m meters underwater; two generations later, the BR03 Diver that we see now offers resistance of up to 300 meters and has passed the standards set out by the International Organization for Standardization on diving watches.

The water resistance is further bolstered by a thick sapphire crystal with anti-reflective coating, and beneath it lies a black dial with white Superluminova and time indications to enable maximum legibility in the deep dark marine.

If you think the BR 03 Diver already sounds resilient enough to rough out underwater adventures, there is still the steel exterior and the iron cage equipped on the 2.80-mm thick case back you need to hear about. Seems like even if you collide with sharks, you can put S$5,300 worth of concerns to rest. The military inspired timepieces in Bell & Ross’ core collection sport a very masculine profile, and the new Novarosa range is about to shake things up. The distinctive name of the new women’s collection, Novarosa, is a simply portmanteau of supernova and rosa; Bell & Ross has closely modeled the design of the timepieces after the astronomical phenomenon, whereby the explosion of stars produce a spellbinding display of illumination in outer space. Rosa –a shade of pink symbolizing femininity, romance and seduction—completes the package.

The trio in the Novarosa collection come in three finishes for everyday wearability: diamond, full diamond and no diamonds. For the diamond versions, round diamonds are encrusted on the bezel and time indications against a pink sunray dial. The non-diamond version feature baton-shaped metal appliques. There are also three different choices of straps: grey calfskin, pink alligator, and for the first time ever, Milanese mesh strap. French novelist Antoine de Saint-Exupery once said, “Perfection is achieved not when there is nothing more to add, but when there is nothing left to take away.” That was the core principle engineers steadfastly stuck to when the BR X2 Tourbillon Micro-Rotor was created, and that is why it comes without a case. Only two plates of sapphire sandwich the mesmerizing movement framed inside of a holder, leaving it to shine on its own as it should. If Bell & Ross is purported to have gone extreme on land, air and sea, you can bet that they have broken new grounds with extreme minimalism. And going by Antoine’s logic, they have certainly inched closer to horological perfection.

Only 99 pieces of the BR X2 Tourbillon Micro-Rotor are produced. 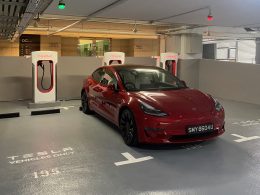 So you’ve reached a point where you are planning to retire and you’re now scanning the different home.…
byalvinology These are the travel trends that Singaporeans had expected for 2020

Do you work in the travel industry? Have you been keeping tabs on recent developments? Before the outbreak…
byAngeline Rodriguez The second stop in our Setouchi tour was Ehime, a prefecture in Shikoku, an island located southwest of…
byRachel Chan
Power up your child's learning with Geniebook.
Sign up for free demo
This is default text for notification bar
Learn more