How will you be spending your New Year’s Eve?

I will be at Rock On! 2017, Singapore’s largest countdown concert which will be held at The Float @ Marina Bay, headlined by Alicia Keys (and the good news is I have a pair of tickets to giveaway to a lucky reader)!

Rock On! 2017 is set to be the largest countdown party in Singapore, boasting 12 top acts with 8 hours of music. Each artiste will put up at least 20-minute long performances, complete with a full band. Global singer, songwriter, producer and philanthropist Alicia Keys will take the stage to lead an unforgettable night. Having just released her sixth studio album “Here” to critical acclaim, Keys – a 15-time Grammy Award-winning artist will bring her headline credentials for a solid 40 minute set of soulful and powerful performances speaking to the cultural climate of the world today.

American rock outfit Hoobastank will also be joining the stage that night as well! Fans can certainly look forward to Hoobastank belting out favourite hits such as “The Reason” and more! It will be an explosive 40-minute set of performances and nothing less!

Not forgetting homegrown talents, our very talented singer and actress Joi Chua (蔡淳佳), Chriz Tong（汤薇恩） , Ferlyn G, rock band Shirlyn & The UnXpected and Gilded Edge will be performing at Rock On! 2017 as well.

Staged at the world’s largest floating platform, Rock On! 2017 will be held in the heart of the Lion City’s Marina Bay, with iconic skylines as backdrop. Previous mega-events at The Float @ Marina Bay include “SMTOWN Live Tour III” in 2012, Countdown Party 2014 and 2015, National Day Parade 2007-9, 2011-14, 2010 Summer Youth Olympics opening and closing ceremonies.

One of the first big-scale international music concert held at The Float was the Singapore Entertainment Awards in 2009 and 2010. I have fond memories of the venue because I was part of the organising committee which brought the event together then.

Tickets will remain affordable despite the concert’s large scale and mammoth production value, ranging from S$48 to S$218.

Eight-minute fireworks spectacular to close of the year

What’s a countdown party without fireworks?

At the stroke of midnight, the Rock On! 2017 will culminate in an eight-minute firework display, filling the night sky with its dazzling show of lights, capping off 2016 and heralding 2017 with a stunning display of light feats!

Tickets are now available online or you can also purchase them from Singpost offices islandwide. Grab them before they are all sold out!

Good news for readers of Alvinology who would like to attend the Rock On! 2017 concert. We have a pair of yellow zone tickets (worth S$316) to giveaway!

3. Tell us why you wish to win the concert tickets by commenting below or on our Facebook post.

Contest ends at 11.59 pm on 27 December 2016. The winner will be notified via Facebook, and must be able to collect the prize in Singapore.

One of the most expected holidays of the year is coming, and it is Halloween! Are you going…
byContributor 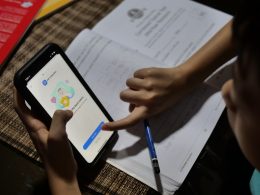 Dyson reveals the Dyson Digital Slim vacuum, a lightweight and powerful cord free vacuum engineered to deliver a…
byIrone Kim
Hello. Add your message here.
See how Snapask has been helping out over 3 million students around the world. Find a perfect plan