I have been using the ViDi LCD Action Camera for the past few months throughout my travels to countries like Sri Lanka, Australia, Hong Kong, Japan, the Philippines, Thailand, Vietnam, America, Canada, India and Indonesia. My ViDi has trekked with me through the mountainous tea plantations in Sri Lanka; dived into the waters in the iconic Taj Hotel swimming pool in Mumbai, India; survived the Glacier Bay in the Alaskan seas; navigated through the chaotic street traffic in Hanoi; witnessed top music celebrities perform at the MTV Music Evolution 2016 concert in Manila; and most recently, braved the roller coaster rides at Disneyland Hong Kong.

It has been quite a journey and the nifty little video camera had not failed me. It is light weight, compact and very easy to use.

The ViDi fits easily into my pants pocket, weighs just 57 grams and is waterproof when fitted with the transparent case.

The biggest selling point is that it cost less than S$200 and comes with a waterproof case, a 4GB memory card and extension stick. You do not have to purchase accessories separately.

It is also fully charged when unboxed and can be used right after. It can shoot at 12 megapixels with an ultra wide angle lens, providing the perfect versatility to shoot action videos like moving objects or breathtaking sceneries.

Here are some of the videos I recorded during my travels for the past few months:

Train ride from Colombo to Kandy in Sri Lanka:

Glacier Bay in the Alaskan seas, on board Princess Cruises’ Crown Princess:

The ViDi camera is available for purchase online via Lazada and it comes with a one year local warranty, offered by the sole distributor in Singapore, Tat Chuan Acoustic Pte Ltd.

If you prefer to purchase it at physical stores, it is available in Singapore at reputed tech retailers like Courts, Challenger, iStudio, NuBox and Analogue+. It is currently among my must-pack items when I travel, together with other essentials like my trusty Panasonic Lumix GX7, my laptop and travel adaptors, among other tech gadgets.

In case you are thinking this is just a cheap knockoff of the popular GoPro action camera, ViDi is endorsed by football superstar Ronaldinho and has garnered generally pretty favourable reviews from techies online (just do a Google search for reviews on ViDi).

If you are looking to invest in an action camera for your travel needs, look no further than getting a ViDi!

As action cameras can get lost easily like dropping off a cliff or sinking into the sea (though the ViDi camera actually floats when it is kept in the waterproof case), the price point of the ViDi is comfortable enough for me to write off the lost if any mishaps happen to the camera and buy another one as replacement.

Despite the affordable pricing, it delivers great quality videos as you can see from the videos I shot with my ViDi camera.

For those interested to buy a ViDi action camera, more details and specifications are available on Lazada.

Good news for readers of Alvinology who would like to get your hands on a ViDi camera. We have THREE sets to giveaway!

3. Tell us why you wish to win the ViDi camera by commenting below or on our Facebook post.

Contest ends at 11.59 pm on 30 October 2016. The winner will be notified via Facebook, and must be able to collect the prize in Singapore.

Vote for the “4 Heavenly Kings” of Chicken Rice in Singapore

Click on the image above to find out more and cast your vote. Voters stand to win a…
byalvinology 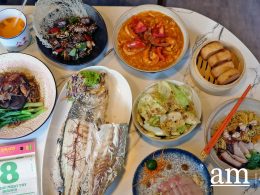