This article was first published on migme Discover.

Many users and artists on social entertainment platform migme have been sharing a series of curious photos of themselves with traces of black patterns etched onto their faces and tagging the photos to #PonyUp. Are you curious what the craze is all about?

Earlier in June, migme ran a contest whereby participating artists stand to win US$1000 cash if they can get their fans to #PonyUp. More details of the contest are available on migAcademy.

Pony is a celebrity make-up artist from Korea with a huge fan base on her social media channels. If you don’t know who she is, you have to watch this video on how she transformed herself from an Asian girl into a Taylor Swift clone using just make-up: In a special collaboration with the MakeupPlus beauty app which is available on migme via fun key, Pony created the Pony filter, which is said to be able to make everyone’s face looks sharper and more beautiful.

Who do you think has the prettiest #PonyUp selfie on social media? Check out 20 of the best ones highlighted on migme.

Why you should care about #PonyUp

Is there any #PonyUp selfie which you particularly like?

Join in the fun by uploading your own #PonyUp selfies on your favourite social media channels. 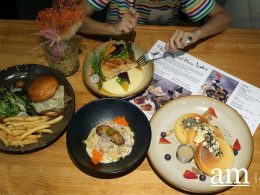 Established in 2018, The Communal Place is a bistro cafe in the Joo Chiat and Katong heritage enclave,…
byalvinology

In a recent tweet, a Twitter user, “C” (named redacted) has come forward as the girl who spoke…
byDanielle Ann
We are now on Telegram with daily deals and giveaways! Click and join our channel. It's FREE!
See how Snapask has been helping out over 3 million students around the world. Find a perfect plan