It was a night of enchantment with many magical moments from across the kingdom in Disney On Ice Magical Ice Festival where the Singapore Indoor Stadium is transformed into a icy winter wonderland.

Disney On Ice presents Magical Ice Festival, where you’ll be whisked away into four Disney Fairy Tales and travel into their stories, adventures and magic. Kids were happy to see their beautiful Disney princesses and sing along to all the familiar tunes, while the adults get mesmerised by beautiful scenes and stunning ice skating performance. A great experience for the whole family. 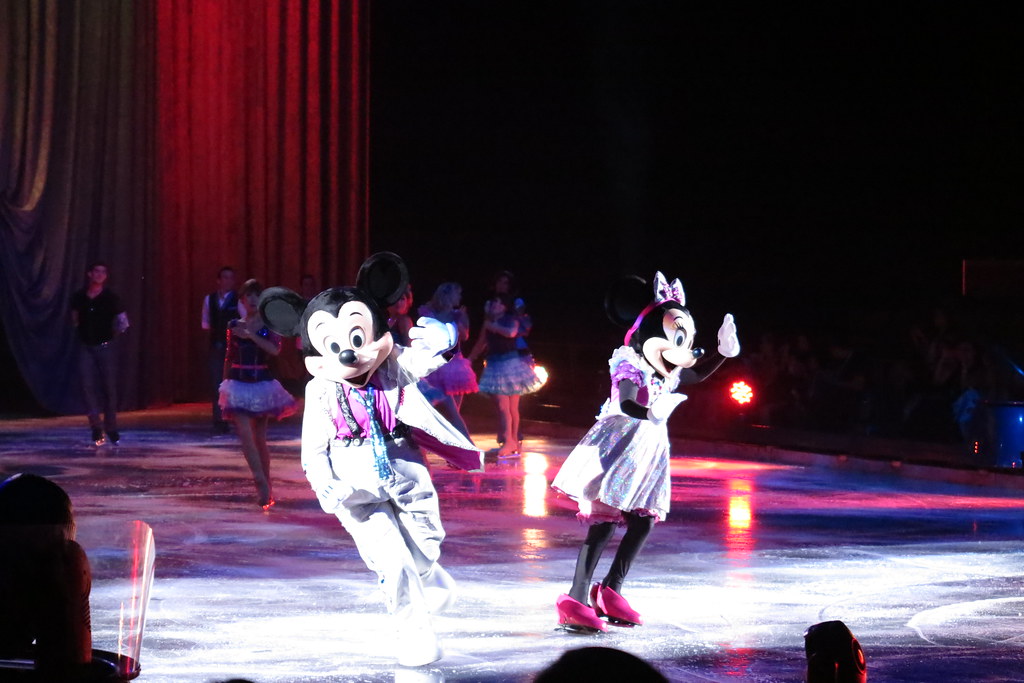 Nothing can stop kids from screaming and jumping up and down in glee when this gang of friends come onto the rink. Mickey Mouse, Minnie Mouse, Donald Duck and Goofy kicked start the show with lots of cheering and happy kids. They play the hosts for the show and appears a couple of times throughout the 2-hour performance.

Dive Under The Sea with Ariel 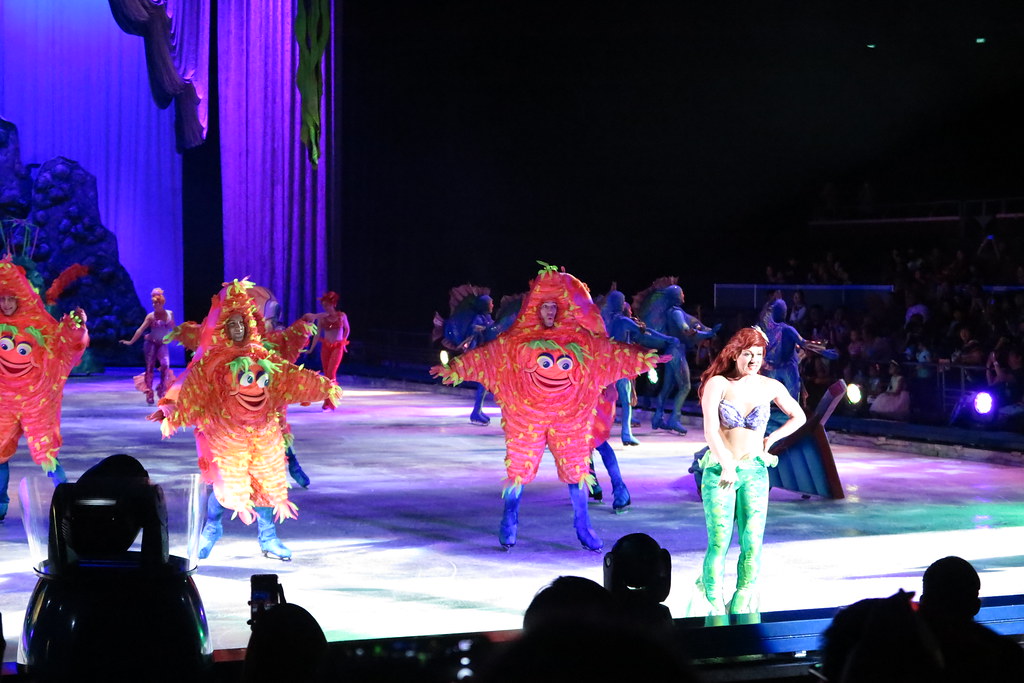 Sebastian the red Jamaican crab brings us under the sea with beautiful mermaids and sea creatures. Ariel filling the stadium with her beautiful voice and the magical moment when she was granted her two legs got all the little girls around me go “YEAH!”. Love the beautiful scene under the sea with colourful costumes, props and lighting. Magical! 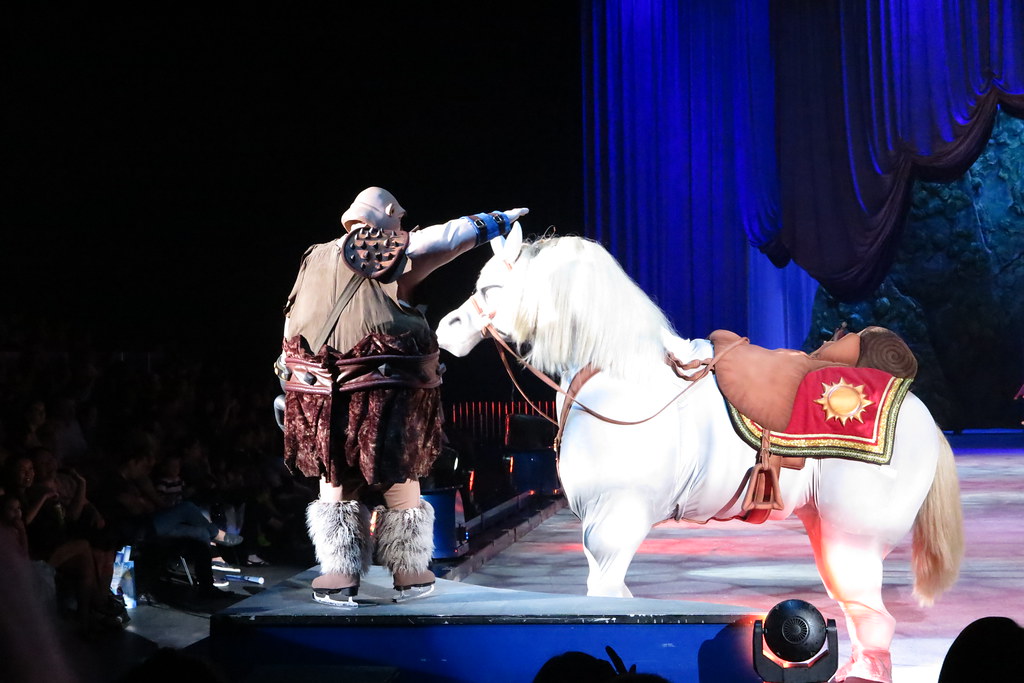 Here Maximums stole the show here I feel, with that grumpy face and larger than life presence on the skating rink. The familiar tunes and scenes of Tangled got the kids all excited. When the lanterns went up into the night sky, that got everyone go “wow” just before we broke off for intermission.

Be Prepared To Shop

When intermission came, I knew it’s time to burn a little in hole in the wallet. And through enough, the many Disney premiums, gifts and toys at the stalls near the entrance got the girls stuck staring for a long time. They couldn’t decide which one to bring home. We ended with two Tangled lantern torch lights just before intermission ended.

Feel The Magic with Belle and The Beast 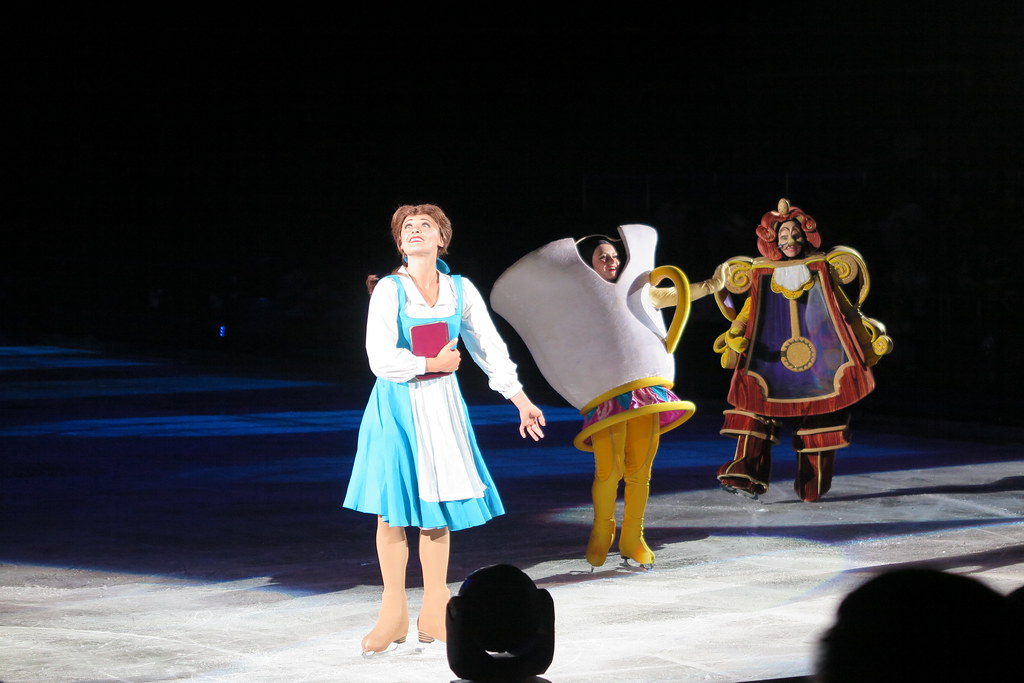 After the break we returned with Beauty and The Beast. Though it may not be the most familiar with most young kids, it was the first time my girls caught the story too, but it still got the attention and applause. Initially I saw sign of lost in their faces and when Belle said the magic words to the beast and he transformed instantly into a prince, Ayra’s face lighted up so bright I smiled. 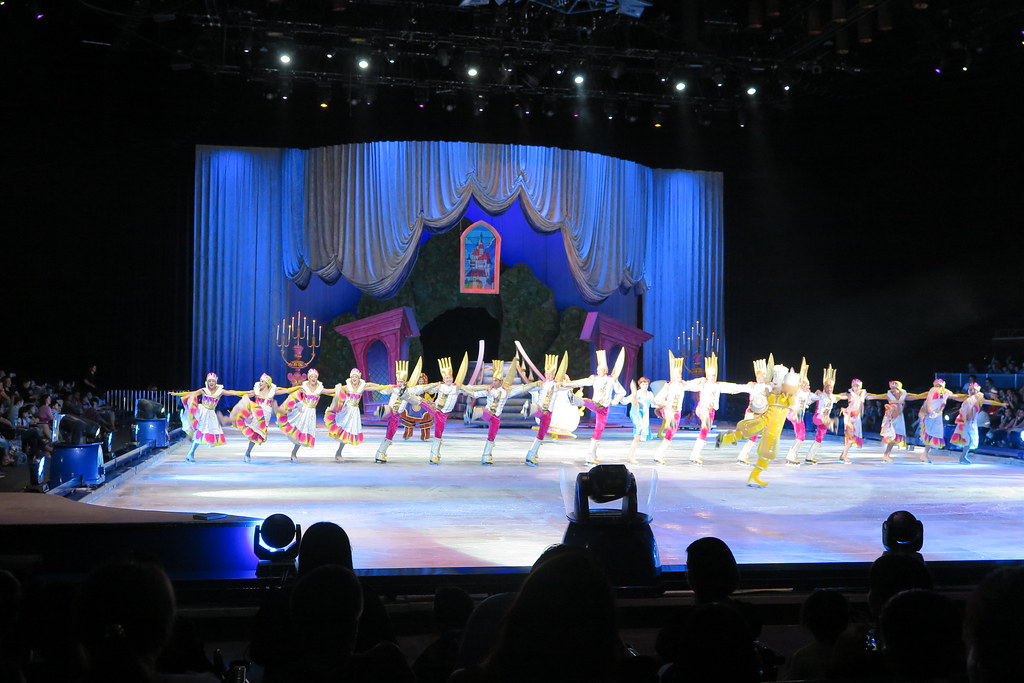 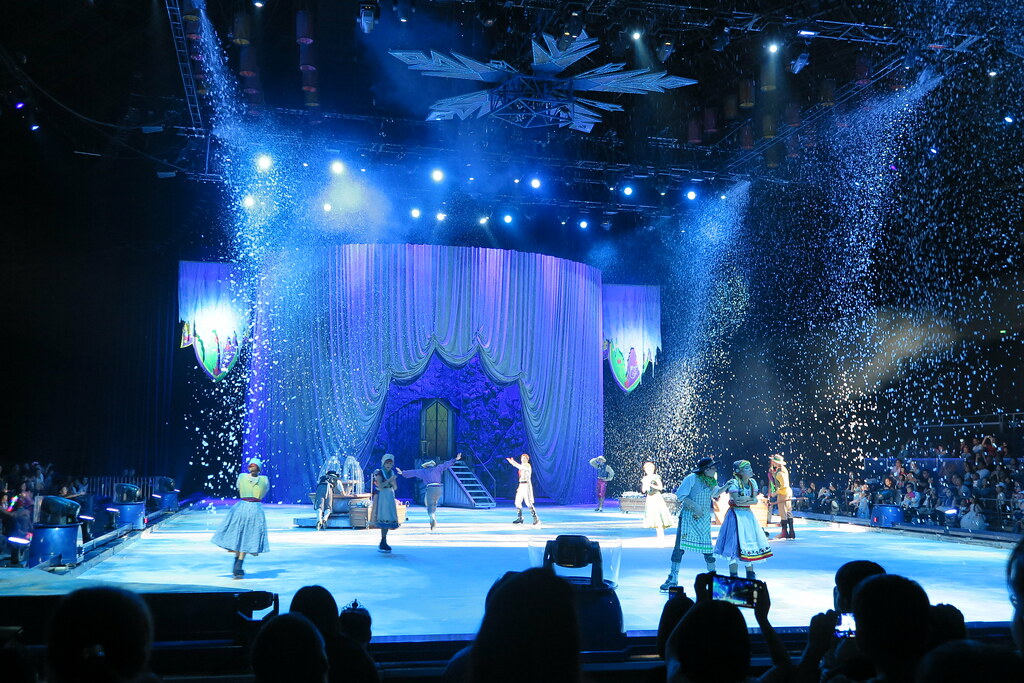 And of cos the one performance EVERYONE was waiting for. And when I said EVERYONE, I’m not over exaggerating here. Even the ushers were on standby just before this section of the show starts. And when Anna appeared, they had to charge around the rink to ensure no little ones dash into the rink! 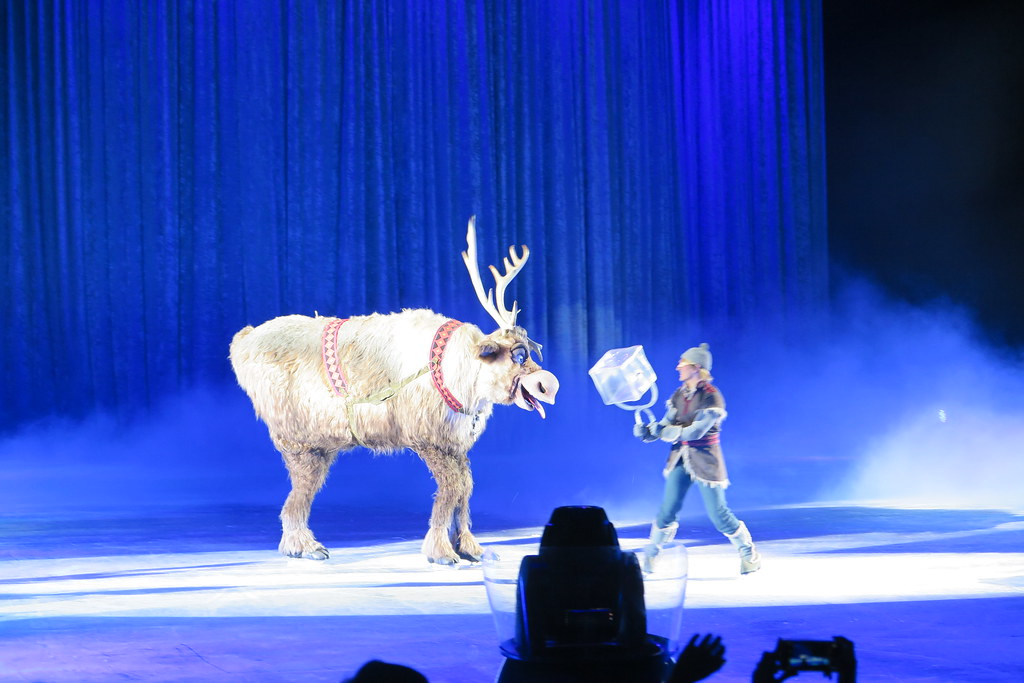 Kristoff and Sven received lots of cheers and love from the crowd too. Here again we have Sven who’s larger than life and oh-so-adorable. And Olaf filled the entire stadium with lots of warmth with his “In Summer” performance. Come sing along with me now…

Bees’ll buzz, kids’ll blow dandelion fuzz
And I’ll be doing whatever snow does in summer.
A drink in my hand, my snow up against the burning sand
Prob’ly getting gorgeously tanned in summer.

I’ll finally see a summer breeze, blow away a winter storm.
And find out what happens to solid water when it gets warm!
And I can’t wait to see, what my buddies all think of me.
Just imagine how much cooler I’ll be in summer.

The hot and the cold are both so intense,
Put ’em together it just makes sense!

Winter’s a good time to stay in and cuddle,
But put me in summer and I’ll be a, happy snowman!

When life gets rough, I like to hold on to my dream,
Of relaxing in the summer sun, just lettin’ off steam.

Oh the sky would be blue, and you guys will be there too
When I finally do what frozen things do in summer. 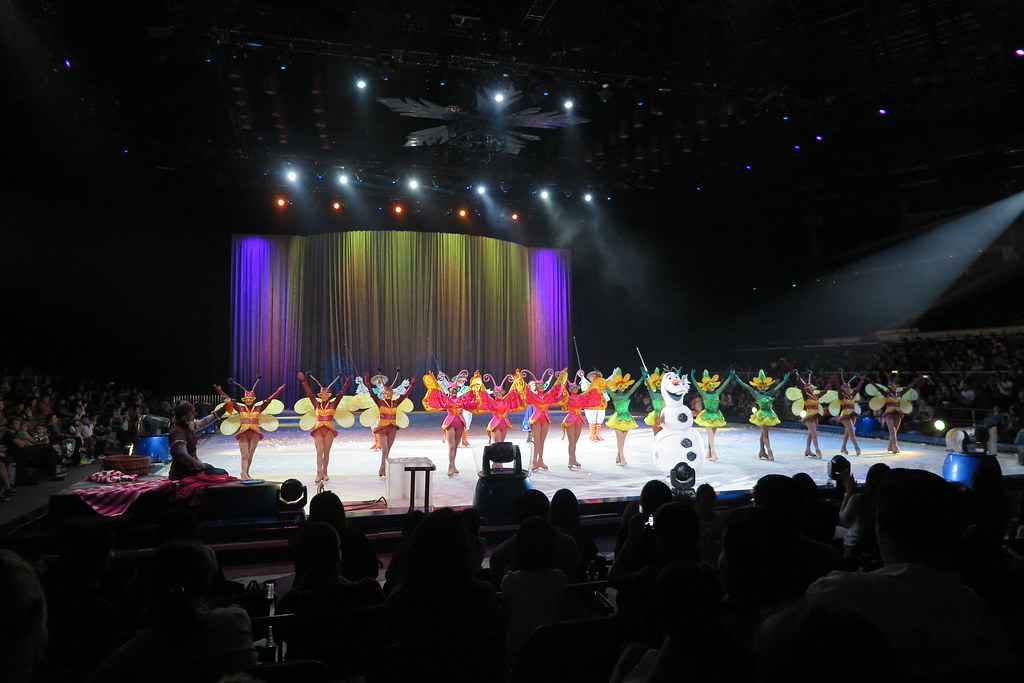 Frozen is 101% the most well loved and anticipated part of the show. All the little girls around me sang at the top of the voice to all the tunes from Frozen, screamed and waved at Anna and Elsa when they appeared and clapped non-stop when it ended. This is also where all the parents will feel “Yes, this is so worth my money. See that smile on their faces!”

On The Third Generation of Family Entertainment

Do you know Disney On Ice was founded in 1980 and now its on to their third generation of producers – Nicole Feld and Juliette Feld. Founded by their Father (Kenneth) and Grandfather (Irvin), these two ladies grew up with Disney On Ice, spending their summers in rehearsals, and watching the Disney characters come to life before their own eyes. Together with their sister, Alana, they represent the third generation of the Feld family to produce live entertainment.

If you have not gotten your tickets yet, do so now at Singapore Sports Hub Ticketing. Ticket price from $25 to $120 each. Magical Ice Festival is on till 20 March 2016.

Your little girls probably won’t want you to miss it. If you think cars and mobile phones are from two different worlds, you have not seen the PORSCHE…
byShiela

[PROMO] Vietjet upgrades its Skyboss Power Pass – now available for purchase at a flat rate, and 50% off for the first 50 purchases! Over a dinner at Stellar @ 1-Altitude, Standard Chartered Bank Singapore introduced to a group of privileged bloggers, The Good Life mobile…
byalvinology One of the world’s best-selling children’s history brand, Horrible Histories, is coming to cinemas and the first film…
byalvinology