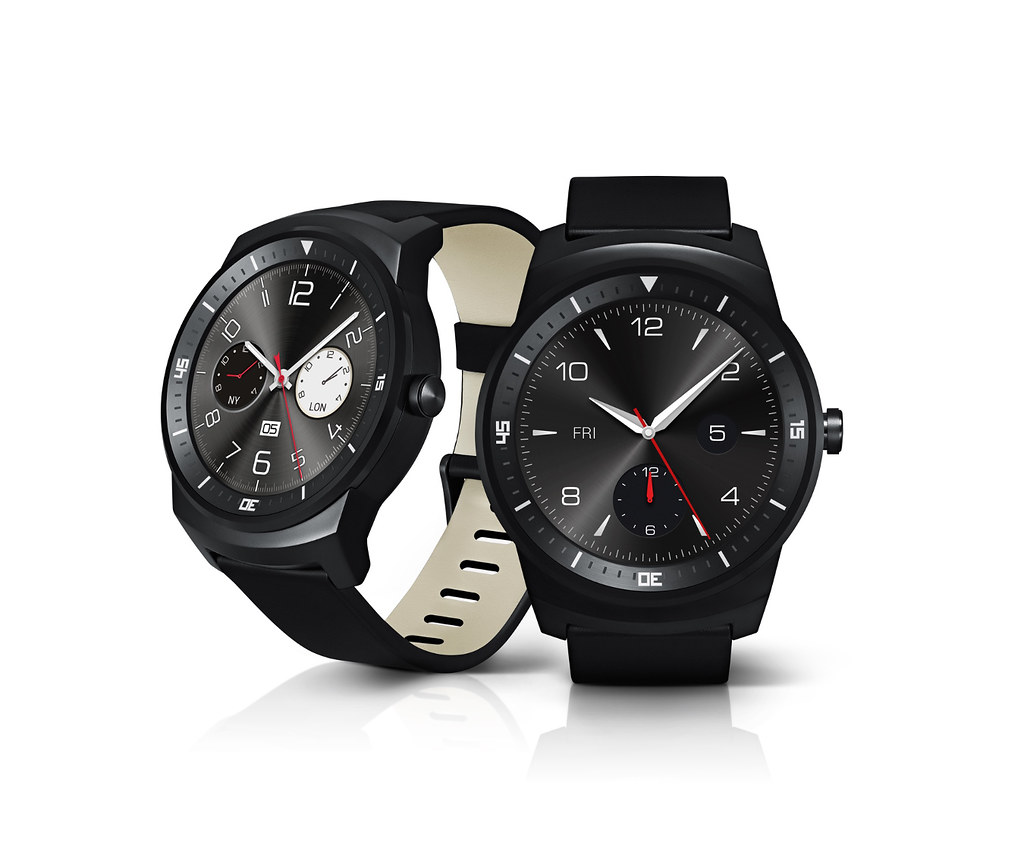 Smartwatch became all the rage last year because Apple announced they will be producing and releasing smartwatches soon. All the other tech brands like Motorola and Samsung are crying foul, having launched smartwatches earlier, but never managing to garner this kind of fervent which Apple did.

LG jumped into the fray in November last year when they launched their updated LG G Watch R which made its world debut at IFA 2014. I was loaned a set of the LG G Watch R to play around and I wore it with me for about two months, bringing it to Jakarta, KL, Laos, Bangkok and some other countries.

I must admit, I grew real fond of the watch by the time I was to return it. I almost wanted to purchase it, but what held me back was that I am using an iPhone, a MacBook Pro and an iPad Mini. I do not have an Android device to pair it with and had to rely on a LG phone which was loaned to me. It was quite a hassle to have to bring the LG phone out just so I can synchronised the clock time every time I travel to another country. It sounds like something very easy to do, but the only way to change the time on the watch is  to change it on the android device it is synced to – in this case, the LG phone which I was not using. As I don’t use the phone, it is always out of battery as I do not charge it regularly. I would then have to charge it just to change the clock timing on the watch.

It is no fault of the LG G Watch R, but the Android Wear app which it runs on. The app is obviously designed with a biased for someone who is using an Android phone as a primary phone or has a primary Android device.

I have a Lenovo Yoga tablet now which runs on Android though. Maybe I will reconsider. I miss this awesome watch face (my favourite design among the 15 designs to choose from): 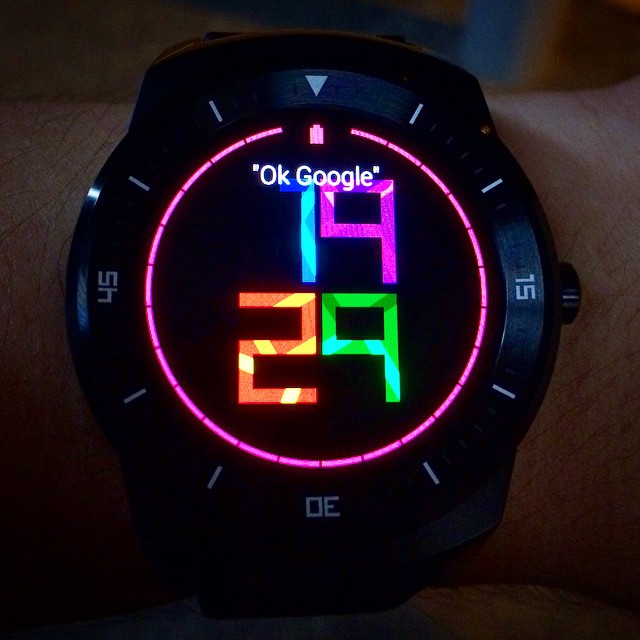 What I like about the LG G Watch R?

Well… because it is like like a real watch. Minus all the geek features, the design is really quite sleek and stylish. There is a wide range of beautiful clock faces to choose from, all of which look like real watch faces with not too much geeky bullshit. 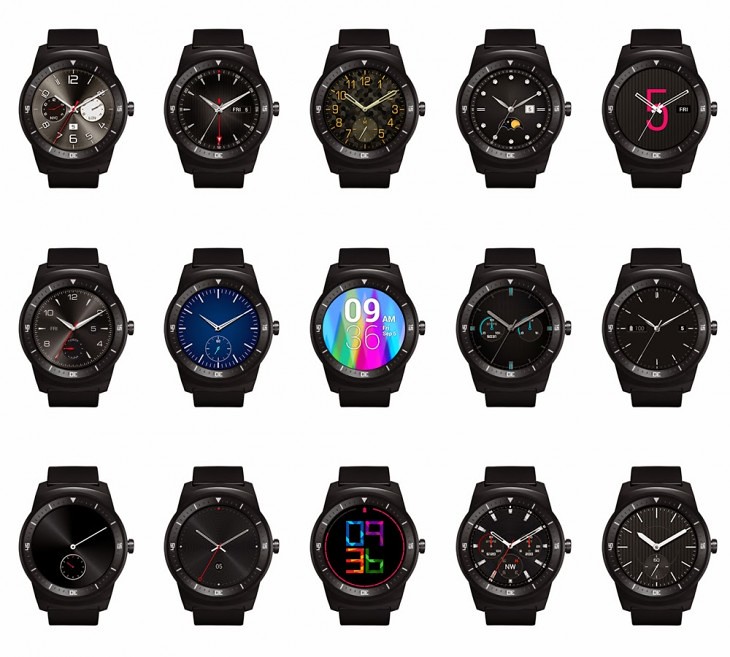 The LG G Watch R is also the world’s first watch-style wearable to feature a fully circular Plastic OLED (P-)LED) display. Others have a straight line cutting across at the bottom. Here’s a comparison between LG G Watch R and a brand X which my friend was wearing: 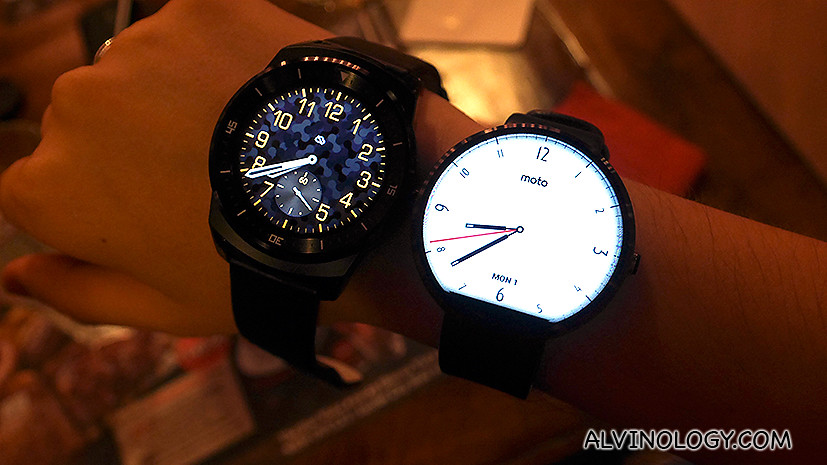 Designed and built to last, the LG G Watch R is encased in durable stainless steel and aluminum powered by a 410mAh battery, supporting 48 hours of usage. The battery life is pretty good. I usually use the “Always On” feature for the watch face which drains the battery more, but it still lasts for around two days.

The watch is also protected from dust and is water resistant for up to 30 minutes at a maximum depth of one metre. I like that the watch comes with a removable black leather strap that can replaced easily with any 22mm standard width watch strap for your own customisation.

Compared to the original LG G Watch, the LG G Watch R offers six new pre-loaded watch faces and improved power savings in ambient mode. In addition to the pedometer, the G Watch R is also equipped with a heart rate monitor making it the ideal work out accessory. Updates will be performed seamlessly through the smartphone with the owner’s permission.

“While the original G Watch functions as an essential companion device that is simple to use, the G Watch R was developed for those with an eye for aesthetics,” said Mr. Scott Jung, Managing Director of LG Electronics Singapore.

“The G Watch R embodies LG’s commitment to bring style and functionality together and to create a device that not only looks great but more importantly, offers technology that makes life more convenient for its consumers.”

The LG G Watch R is available at a recommended retail price of SGD$398 in all telcos and authorised retailers. The time has come again to make a trip down to IKEA – no, it’s not for furniture…
byCarrie Er 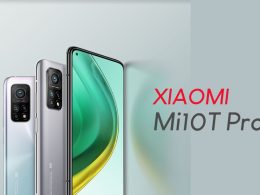 [PROMO] Xiaomi Mi10T Pro arrives in Singapore – order from these authorized sellers and get a chance to receive premium gifts and exclusive vouchers!

Xiaomi announces the launch of Mi 10T Pro and Mi 10T in Singapore. Priced at SGD649 for Mi…
byIrone Kim

Face of Amazon Pets Contest – win a chance for your pet to be featured on Amazon, plus walk away with over $1,500 worth of prizes!